Small drones expand research horizons for scientists at the National Oceanic and Atmospheric Association, gathering massive amounts of data that, so far, is easily captured and stored.

However, as the drones get smarter and more sophisticated, employing artificial intelligence to direct data collection and advanced imaging to get clearer pictures, the storage and security picture will change for scientists out in the field.

“The amount of data and data services is just the absolute key to all these uncrewed systems, whether they are marine systems or aviation systems,” says Capt. Phil Hall, director of the NOAA Uncrewed Systems Operations Center in the Office of Marine and Aviation Operations.

“Data archiving, data analysis, cloud storage networking — all those areas are priorities for NOAA,” he adds. 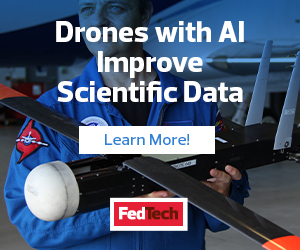 Its Atlantic Oceanographic and Meteorological Laboratory, for example, uses drones to measure the strength and development of hurricanes; the National Ocean Service uses seaborne autonomous surface vehicles to help map the Arctic seafloor. The National Severe Storms Laboratory measured damage to rural areas in Iowa after a 2020 derecho via drones.

They drop tube-launched, fixed-wing drones into hurricanes; send vertical-launch hexacopters to count sea mammals; and, in the past, used NASA’s uncrewed Global Hawk aircraft for missions that last more than a few hours.

Scientists who monitor seal and sea lion populations in Alaska generally don’t worry about data transmission; in some situations, they move the drone-collected data by hand.

“For our UASs, we actually have onboard memory storage,” says Katie Sweeney, a biologist at NOAA’s Alaska Fisheries Science Center Marine Mammal Laboratory. “So we take out the SD cards to collect the images and flight logs.”

Watch the full video to learn more about the drone data used by NOAA.

As NOAA looks ahead to smarter drones collecting larger amounts and types of data, data storage and analysis processes will become more sophisticated.

“Data management and the whole data stream is really important, as is identifying early on how that’s going to work,” Hall says. “We don’t have any sort of overloads at this time, but we expect as we start going to 24/7 operations and more systems that this will become a very important issue.”

Artificial intelligence will also change the ways scientists collect and analyze data. Cione plans to use AI to help guide drones deeper into hurricanes for more complete data, while Sweeney says that it will help her team interpret the various kinds of images their drones will make of the fur seals.

“We are going to pursue using AI to process that imagery and automate that process, because it just wouldn’t be feasible to do with the human eye,” she says.

For more on NOAA’s use of drones, check out our Feds in the Field video page.