First the good news: In the past three years, the federal government has avoided more than $47 billion in improper payments. Now the bad news: It still doled out $108 billion to debarred contractors, dead people, prisoners and others who didn’t qualify for the checks they cashed.

“It’s a very large problem,” says Kevin R. Jones, executive director of the Do Not Pay Business Center within the Treasury Department’s Bureau of the Fiscal Service.

But a series of executive orders, programs and laws — including the Improper Payments Elimination and Recovery Improvement Act that President Obama signed in January — has reduced the rate of improper payments from 5.4 percent in 2009 to 4.4 percent last year. At the heart of these programs are data-mining tools and advanced analytics that are helping agencies across the federal government identify errors and fraud before, during and after they make payments.

“Several agencies within the federal government are pursuing master data management technology to help them achieve a single version of the truth,” says Jeff Vining, research vice president at Gartner. “Master data management is becoming recognized as a required discipline by larger and more complex agencies that wish to use advanced performance analytics.”

Jumping on the Big Data Bandwagon

Among the government’s master data management efforts is a program of the Recovery Accountability and Transparency Board (RATB) to achieve its mission of providing transparency and accountability to the $840 billion spent through the American Recovery and Reinvestment Act of 2009 and this year’s Hurricane Sandy relief bill.

Its first initiative was to collect data from agencies and recipients of grants, contracts and loans, and clearly display on the Recovery.gov website how the money is being spent. Next, it created the Recovery Operations Center, which uses statistical software and an advanced analytics tool. It analyzes federal data collected on Recovery.gov and open-source information to build out relationships on potential high-risk programs or individuals.

In addition to analyzing structured data, which is machine-readable (a spreadsheet, for instance), the Recovery Operations Center looks at unstructured data, such as emails, text documents, social media and geographical information systems. “You can really develop a lot of background information that you can then pass along to the appropriate people — the investigators or the Justice Department,” says RATB Executive Director Mike Wood.

The RATB has helped uncover potential patterns of fraud in several agencies, including the Centers for Medicare & Medicaid Services. CMS then built off the work it did with RATB and created its own Fraud Prevention System, which employs predictive modeling technology. The Fraud Prevention System screens all Medicare fee-for-service claims — the largest source of improper payments in the federal government — before making payments by using sophisticated algorithms and models to identify suspicious behavior, CMS spokesman Tony A. Salters says.

CMS is also implementing an automated screening tool that will compare information received from providers and suppliers on Medicare enrollment applications with various public and private databases, he says.

In 2012, the Fraud Prevention System’s first year of implementation, it prevented or identified $115.4 million in improper payments, generated leads for 536 investigations and added information for 511 existing investigations, according to a report from CMS to Congress. The system saved an estimated $3 for every $1 spent in its first year, according to the report.

While agencies have been building their own capabilities to reduce wasteful spending, the White House has been working with the Treasury Department to create a governmentwide program to eliminate improper payments.

In 2010, the Treasury Department’s Bureau of the Public Debt (which consolidated with the Financial Management Service to form the Bureau of the Fiscal Service in October 2012) developed an online portal called Do Not Pay. The portal connects to several databases, so searches can reveal whether a payee is deceased or otherwise ineligible to receive payments (a contractor who has been debarred, for instance).

The second component of the program is an offline capability that is beginning to use predictive analytics to warn agencies if previously made payments look problematic. A major goal of the Do Not Pay Business Center is to build business rules with agencies so that in addition to flagging potentially improper transactions, as it does now, it can also stop a payment if the rules indicate that it’s improper. For instance, some agencies might cease payments as soon as a recipient passes away, but others might allow payments for a period after death to cover funeral expenses.

Do Not Pay program managers plan to provide feedback to agencies that will allow them to continuously refine the rules. “It’s better to stop payments from going out the door rather than recovering them after,” says Jones.

The Treasury’s Do Not Pay Business Center plans to offer agencies a post-payment review process that will look for linkages and patterns across data sets to flag higher-risk types of payments. The center can’t do that yet because it doesn’t have legal authority to collect or share certain data, but the Office of Management and Budget is in the process of designating Do Not Pay to collect that data.

“It’s a process,” explains Kevin R. Jones, executive director of Do Not Pay. “We have very strong bipartisan support. Everybody knows that this is a good idea.”

In addition to the legal constraints, “there’s a standards issue,” explains Mike Wood, executive director of the Recovery Accountability and Transparency Board. For instance, RATB found that a group that gave out grants used one set of numbers to identify them, but the finance systems that tracked the grants used another.

That’s within an agency; comparing systems across agencies is even more challenging, Wood says. “Even though we have the same information, we’re not calling it the same thing or formatting it the same way,” he explains.

The problem, he adds, is that there isn’t a group that establishes data standards across government, but there’s widespread agreement that there should be.

“A lot of these systems are antiquated,” Wood notes. “They don’t have application programmable interfaces that would allow us to easily transfer the data.” OMB issued a new policy in early May calling on agencies to gather more machine-readable, higher-quality data and to build in ways to access it. But, Wood says, “That’s a longer-term effort.”

There’s a lot of “cool technology” behind the government’s improper payments programs, says Jones, “but what’s really important here is the people.” Do Not Pay is building a cadre of analytics experts to map across the discrepancies in data. “I have cool jobs for the right people. This is really interesting stuff.” 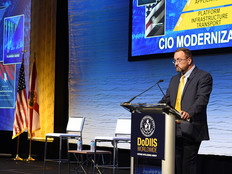