Here’s a question most people don’t ask about the government: Is innovation happening too fast?

According to a recent MeriTalk survey of network professionals working at federal agencies, five popular initiatives — security, mobility, data-center consolidation (DCC), Big Data and cloud, known as the Big Five — are threatening to put existing networks out of commission. Without significant upgrades, networks may not be able to handle the influx of traffic created by these projects. As MeriTalk describes in the survey, “Any single initiative would be a challenge; five may bring networks to their knees.”

Here’s a look at what IT workers have to say about the network challenges they are currently facing. Download the full survey here. 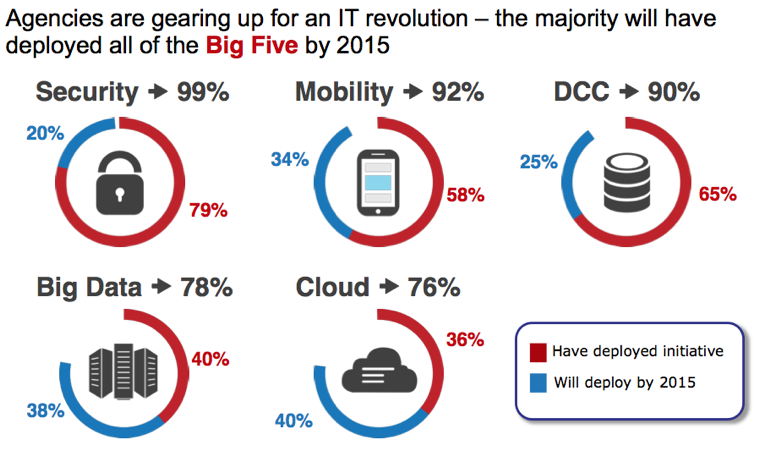 This is just the kind of innovation many people have been waiting for in federal agencies. Mobility will enable feds to work at home or on the go, and data-center consolidation promises savings in the billions of dollars. But do agencies have the infrastructure to support the enormous amount of data that will need to move along its networks? According to MeriTalk, 84 percent of surveyed network managers say their agency can’t handle all five initiatives right now. Bottlenecking is a big concern as “network managers expect their agency’s total network load to increase by 79% as a result of the Big Five.”

Cloud and Big Data Are Set to Disrupt Just About Everything 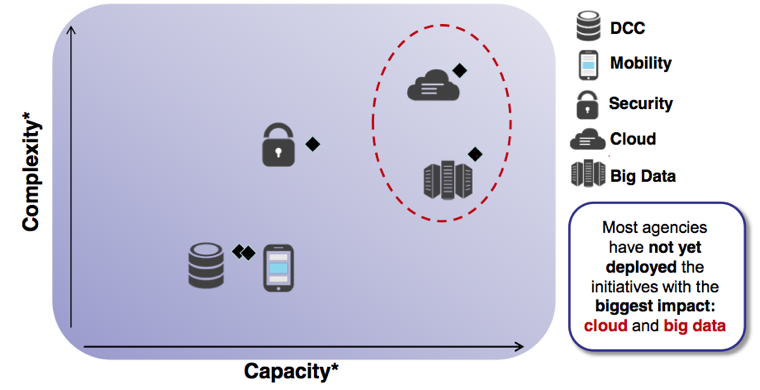 If the aforementioned concerns of network managers weren’t serious enough, the initiatives that will tax networks the most — cloud and Big Data — have yet to be rolled out by most agencies. According to the survey, 59 percent of network managers say that “if launched today, the Big Five would put them at or over their network’s capacity limits.” Bottlenecks create their own set of problems, which would affect productivity, workflow and security.

Agencies Have to Build a Foundation for Success

Network concerns shouldn’t cast a negative light on the Big Five’s potential to dramatically improve agencies’ operations and services, but it’s an issue that does need to be addressed. As usual, in order to save money in the future, the government needs to invest now. IT managers are doing their best to stay within budget as they prioritize upgrades to get the new technology up and running as soon as possible, all while balancing the security risks of each new project.