In theory, the sky’s the limit for federal agency data centers, thanks to the cloud. Hybrid infrastructure allows IT teams to leverage their legacy systems to keep sensitive data on-premises while using cloud services to flexibly scale up as needed.

In practice, however, hybrid IT’s potential is throttled by humans, who can only do so much. Different environments all have various workflows and regulations, and this complexity presents challenges for IT leaders to monitor networks, applications and data with finite resources.

Automation changes the game. Applying automation to data centers minimizes manual, repetitive tasks. It frees IT staff for other, more valuable work, and it reduces the potential for human error. At the same time, integrated management tools provide visibility into an agency’s data and insights into the system’s performance.

Explore 4 federal government IT trends to watch in 2023.

Discover how agencies are changing organizational culture while migrating to zero trust.

Read about device lifecycle management and how it can help with compliance.

Determine if client virtualization is it right for your agency.

Federal Agencies Are Stepping Back to Look Forward

In a way, the first step toward automating hybrid data centers should be a step back, to re-evaluate the agency’s mindset. Gone are the days when legacy systems were simply re-created in the cloud and infrastructure updates were made manually. Still, many agencies haven’t realized this fact.

Federal agency IT leaders can learn a lesson on automation from the way cloud providers came into the market 10 to 15 years ago.

“They didn’t say, ‘How can we scale humans?’ They said, ‘How can we scale automation? Instead of trying to run large data centers with armies of humans, can we use the technologies to start automating and treating these things more like code and less like things that need to be manually configured?’” Buchholz says. “And what they discovered was that not only was it possible, but you also get better scalability, better reliability, better security, better uptime — basically, better everything across the board. And that isn’t just true for servers and storage and network, but it also is increasingly true for databases and application servers.”

He continues: “The cloud providers have conclusively demonstrated that you can run IT operations with a small team and a fleet of automation. And I believe that agencies and departments could take advantage of that if they so chose. The challenge is you have to be willing to change the mentality and the approach for how you go about doing things.”

“It’s not best to consider things as long-running assets and patch them individually, in general. It’s better to assume that they’re images of something, and patch the image and redeploy,” Buchholz says. “There is a lot that can be done in the cloud to take advantage of all of the investments in automation, if you’re already there.

“Those who are in the data centers — particularly those who have the hyperconverged infrastructure — can start taking advantage of that relatively easily, because all of the control planes are there already,” he continues. “For those who haven’t gotten quite that far, there are other ways of doing it as well.” 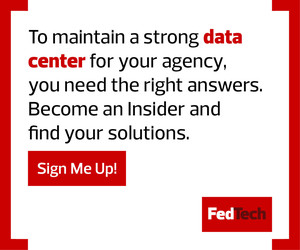 Questions for Federal IT Leaders to Ask Themselves

When looking to automate their hybrid data centers, agencies should:

Start with these questions:

What are the security needs for the agency’s data center? Generally, the most sensitive information can continue to stay on-premises while the cloud houses data needing lesser security. If data is moving from one environment to another, security must be consistent and easily managed throughout the process. Automation removes the potential for human error.

What’s the current capacity of the agency’s legacy systems? In a time when increasingly more resources are being focused on the cloud — by internal IT teams and external providers — organizations are motivated to maximize their investment in legacy systems. Agencies would do well to figure out the state of their physical systems, including the amount of effort required to maintain them and what information needs to stay on them versus what can move to the cloud.

EXPLORE: How the FITARA scorecards are encouraging IT modernization.

Cloud data centers are a sort of safeguard, layered on top of legacy systems to avoid disruption during peaks in demand. “When an application hosted on-premises exceeds the local resources, configuration or infrastructure as code (IaC) tools automatically triggers cloudbursting and expands to the public cloud,” writes Cem Dilmegani, principal analyst at AIMultiple.

The more the agency’s data moves, the more that automation will help IT leaders optimize the flow.

What visibility is required for the agency’s data? Manually keeping an eye on information when it lives in a wide variety of environments is labor intensive. End-to-end orchestration can automate processes and give IT leaders a centralized view of the agency’s data across all environments, all while cutting the number of tools they need to do this.

“For example, hybrid cloud automation enhances the accessibility of data across the enterprise,” Dilmegani writes. “Data saved in data centers can be shared with the software operating on the cloud, decreasing the manual labor and the time spent on data transfer.”