Zecharia Kahn, division chief for IT operations at the U.S. Agency for International Development — the first agency to receive an A on the FITARA scorecard, says that the impact goes far beyond the grade.

To see the impact of the Federal Information Technology Acquisition Reform Act, all you need to do is look at the numbers — and the letters.

FITARA’s semiannual assessment ranks agencies on how well they meet the requirements outlined in the law, including data center optimization, enhancing CIO authority, cybersecurity and more.

When 24 agencies were first assessed on the FITARA report card in 2015, only seven received a grade of C or higher. On the most recent scorecard, every agency received a C or higher, with half earning an A or a B.

Over that same time frame, those agencies have saved more than $30 billion through IT modernization and optimization, and 82 percent of software projects now use incremental (or “agile”) development workflows.

Before 2015, only two of the 24 agencies had software license inventories. Today, they all do.

“The FITARA scorecards monitor federal agencies’ initiatives in implementing statutory requirements and other key issues,” O’Brien says. “Having this information in a single report helps congressional oversight and provides agencies a comparison of where they are versus other agencies facing the same initiatives.” 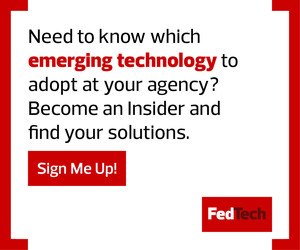 How USAID Has Optimized Its IT Environment

The first agency to receive an A on the FITARA scorecard was the U.S. Agency for International Development, in January of 2017. USAID has continued to rattle off high grades ever since, earning its sixth A in July.

Zecharia Kahn, division chief for IT operations at the agency, says that the impact of FITARA goes far beyond the scorecard.

“FITARA is really important, and we’re proud of the results we’ve had,” Kahn says. “But outside of achieving an A on the report card, the IT modernization and the work that we’ve done has allowed us to be more nimble and flexible and provide really good service to our mission.”

“It’s allowed us to meet our programmatic operations goals around the world, and it helped us pivot to remote work during COVID,” he adds.

Kahn identifies three major changes that have helped USAID optimize its IT environment and ace the FITARA scorecard. For one, the agency long ago shifted to cloud collaboration and cloud email through Google. Also, USAID has moved its entire data center environment to a secure cloud, primarily migrating resources to Microsoft Azure and Amazon Web Services. Finally, the agency has adopted agile processes for 100 percent of its software development efforts.

The cloud, in particular, has helped USAID shave costs and ensure that the agency doesn’t overprovision resources, Kahn says. “There are real benefits. We spin up test and development environments, and then spin them down on a regular basis to achieve cost savings.

“We’ve been really intentional about putting governance controls in place,” he adds. “To spin up resources, people need a funding source, and they need to identify exactly what they’re doing. That’s helped us to avoid cloud sprawl.”

“The cloud also helps with cybersecurity,” Kahn adds. “If we think there’s an issue with something, we can rebuild a server from scratch without having to worry about finding the hardware. And the ability to be flexible and scale up if we need to is really important.”

Along with encouraging specific changes to the way technology is procured and deployed, Kahn notes FITARA has promoted a culture shift across government.

“FITARA redefines the role of the CIO within the organization,” he says. “Congress has really innovated the scorecard over time, and it’s had all these positive outcomes. Agencies are influenced by the priorities that Congress is laying out, and then we have a forum to show the progress that we’ve made.”

Congress has really innovated the scorecard over time, and it’s had all these positive outcomes.”

How Agencies Can Maintain Accountability While Optimizing

The major difference between FITARA and the IT optimization laws that have come before it is the level of accountability involved, says Carol Harris, director for IT and cybersecurity issues at the Government Accountability Office.

“One of the major reasons FITARA has been so successful is because of the scorecard and the hearings that have been held,” Harris says. “Those are such effective tools to keep agencies accountable. People want to get the best grade possible. I think that accountability inspired agencies to really accelerate their plans so they can get the best possible grade with each release of the scorecards.”

“It’s changed the landscape of IT modernization,” Harris adds. “Agencies have greater internal controls now, and they are more disciplined in terms of how they approach software development. They’re getting better results. This is such a good-news story.”

Harris notes that much of the cost savings achieved by agencies has been the result of PortfolioStat, a tool for agencies to assess the current maturity of their IT portfolios and eliminate redundancy in their environments.

Launched in 2012 by the Office of Management and Budget, PortfolioStat actually predates FITARA; however, Harris notes that the law provides a measure of accountability to ensure that agencies actually use the tool.

EXPLORE: Green computing and how it can help federal agencies cut emissions.

“I strongly believe that the consistent hearings and the scorecards have been so effective at making sure agencies carry through on these initiatives,” she says. “It’s about consolidating commodity IT across the agency — HR systems, finance systems, network infrastructure, email systems — things that can be shared across the organization.”

FITARA has been so successful that Harris says there has been talk about removing some categories from the scorecard, simply because they don’t seem to be needed anymore.

For example, every agency has earned an A grade for data center consolidation, leading some to question whether the category has outlived its purpose.

“Since 2010, the government has closed about 6,800 data centers, resulting in a savings of $6.6 billion,” Harris says. “The rate of consolidation has slowed, and it’s going to continue to taper down.”

Looking ahead, Harris says, Congress may tweak the FITARA scorecard to add emphasis to areas like cybersecurity, employee training and change management. “Agencies still struggle with changing their culture,” she says. “Changing technology is much easier than changing the culture of an organization.”

Savings achieved by federal agencies since 2012 through PortfolioStat, a tool used to assess the maturity of IT portfolios and eliminate duplication

The DoE Is Taking an Enterprise Approach to IT

Walter McDonald, a senior executive at the Department of Education who provides oversight for the agency’s governance process and FITARA, has witnessed this sort of culture shift firsthand.

As a result of the law, he says, the Department of Education has adopted more of an enterprise approach to IT — a departure from the previous federated or siloed approach.

“FITARA really gives IT a seat at the table in the budget and acquisition processes,” McDonald says.

McDonald says FITARA has helped officials improve a number of IT modernization initiatives. Recently, the department undertook efforts to revamp its grants management system, and IT leaders opted for commercial, off-the-shelf applications to build the new platform.

“FITARA helped us avoid falling into the same trap of building and being tied to custom-coded systems, which in the long run would cost more money and tie us into contractual engagements that are not beneficial to the government,” he says. “As we modernize, FITARA helps us to look at things through a different lens and make sure that the government has unimpeded rights to our data, which gives us the ability to be more agile when transitioning from IT systems or vendors.”

DISCOVER: How agencies can ensure reliability in edge computing.

“FITARA allowed us to have flexible contracting vehicles in place to address the emerging technology needs,” McDonald says. “The laptop refresh is one of those examples. It resulted in a better deal, and gives us the flexibility, if that contract was not fulfilling our needs, to go and seek alternatives in a way that you couldn’t do with a consolidated contract.”

The department recently began to combine its websites into a single hosting environment, reducing costs and shrinking the agency’s exposure to cybersecurity threats.

“Before FITARA, that would have been more of a suggestion,” McDonald says. “The CIO could do a business analysis and say it makes more sense to have all our sites hosted in one place. FITARA now gives the CIO the authority to make that decision.”

On the FITARA scorecard, 24 federal agencies receive grades between A and F across seven categories. Here’s a breakdown of how they fared on the last report card, issued in July. 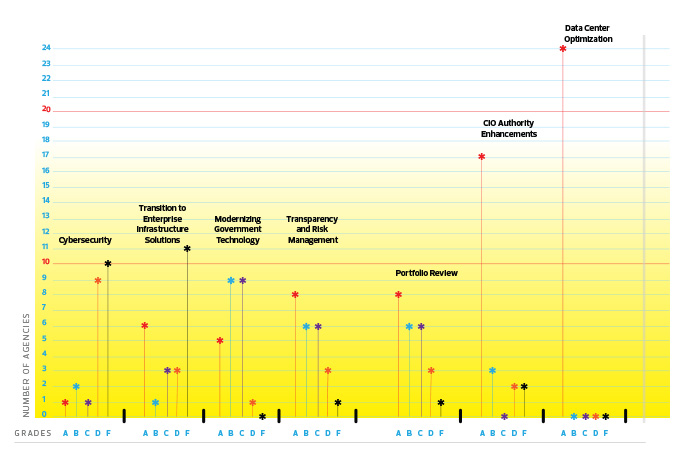