It's hard to imagine that the federal government has been operating without a technology assessment agency since 1995, which is the same year Microsoft released Internet Explorer 1.0. Comprehensive, unbiased information about technology would be helpful in 2013, when IT is more important than ever to government operations and citizen services. One wonders: How would the Healthcare.gov rollout have been different if a dedicated agency had been researching the necessary technology months, or even years, in advance? How would the IT procurement process have evolved with a team of experts streamlining the system?

It's impossible to know, since the Office of Technology Assessment (OTA) was defunded in September 1995, after 23 years of valuable work.

A Brief History of the Office of Technology Assessment

In March 1970, Congressman Emilio Q. Daddario (D-Conn.) introduced H.R. 17046 to the House of Representatives. Daddario had served on House subcommittees for science, research and patents since his election in 1958. Once the OTA was established, he served as the agency's director from 1973 to 1977.

When the bill was passed, there was great concern from the private sector that the OTA would only slow innovation. According to an April 1972 article in Business Week, leaders from General Electric, Motorola and Bell Labs expressed concern that the OTA would not be able to predict long-term technology trends and that their research would delay legislation that could lead to technology advancements:

There were also concerns that the OTA would never be able to separate itself from politics, considering its 13-member governing body consisted of politicians. Throughout its 23-year history, the OTA was dogged by conflict, personal political ambitions and criticism from the media.

Politics aside, the agency was busy reporting on the effects of everything from space travel to natural gas and solar power to public transportation. According to the Atlantic, the agency published more than 750 detailed reports, and its employees — more than half of whom held doctoral degrees — were admired for their "pragmatic style" and "attention to societal impact." It's hard to argue that the OTA's work, regardless of political influence, was anything but exceptional.

The agency's defunding and eventual closure came on the heels of Newt Gingrich's "Contract with America," which called for limited government and the reduction of duplicative functions. On September 29, 1995, the OTA closed its doors. Here is a look at some of the agency's work, nearly all of which, with the advantage of hindsight, sounds prophetic. Forget the subtitle above and try to imagine when this paragraph was written:

Cheaper computing hardware, the emergence of data communication-based systems, and new software techniques are changing the way computers are used in industry. The next 10 years will see significant movement in the private sector toward automating the flow of information in offices, toward experimenting with new management structures based on high-volume data communication, and toward automating decision support systems for use by higher management.

The OTA's 1981 report Computer-Based National Information Systems: Technology and Public Policy Issues was requested by several congressional committees to help members of the House and Senate understand computing trends and examine possible uses, as well as challenges, for digital information over the next 10 years. The report refers to America as a "computer-based information society" and essentially deems that Big Data will be at the crux of the way government operates in the future:

The air traffic control system handles nearly 20 million flights yearly. Every year the financial system clears over 30 billion checks, the U.S. Postal Service delivers over 100 billion pieces of mail, and the Internal Revenue Service (IRS) receives more than 140 million tax returns. The use of computer-based systems is one way to cope with this vast and complex information flow.

The government has been thinking about Big Data for decades, and in 2013, agencies are still grappling with techniques and tools to handle it efficiently. Despite OTA’s charter to remain unbiased, it concludes that the digital information systems will be so useful that "the Federal Government would be remiss in not making use of them where appropriate."

1982: Implications of Electronic Mail for the U.S. Postal Service 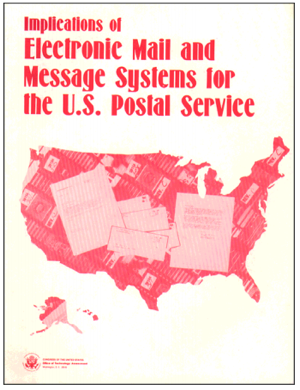 This report alone makes a strong case for the OTA's value to the federal government and the American public. As far back as 1982, the OTA called for drastic changes to the U.S. Postal Service to prepare for the coming onslaught of free and cheap digital communication methods.

Changes are taking place so fast in the so-called “communications revolution” that by the time USPS actually experienced significant reductions in conventional mail volume, most opportunities for participation in [electronic mail and message systems] would have passed and it would be much more difficult to adjust.

FedTech's article The Postal Service’s 30-Year Relationship with Email dives deeper into this issue, revealing some concerning missteps that could have prevented the postal service's current decline. 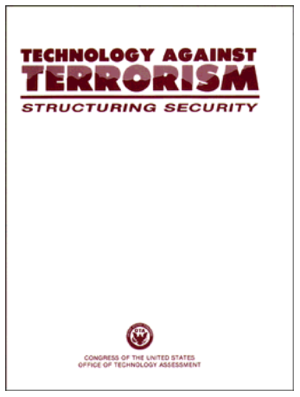 Over the past several months, great attention has been paid to the NSA's PRISM surveillance program, which collects large amounts of data and tries to identify trends that might highlight terrorist activity. The OTA was researching technology like this in the early 1990's, following the 1988 destruction of Pan Am Flight 103 and the bombing of U.S. Marine barracks in Beirut in 1983. While the "Data Dissemination" section of the report focused mainly on communication between federal, state and local agencies and law enforcement, the database described below sounds eerily similar to PRISM:

One major technical effort in the data dissemination area about which OTA has so far received detailed information is a large computer software and networking effort intended to assemble, update, and correlate all known information on terrorist groups. One eventual goal is to achieve a rough predictive capability of terrorist attacks--obviously not a precise prediction of target, date, and time, but rather an ability to issue plausible alerts over periods when attacks might be expected. Another aim would be to attempt to assess the nature of a specific threat.

Continued research about data dissemination and privacy could have made Congress and the public more aware of the implications of data collection. Without passing political judgment, most people would agree that the published research on the topic would have been beneficial to Americans. It's also fair to suggest that the OTA, if it still existed, would have focused on privacy as data becomes increasingly important in government technology.

Senator Ted Kennedy (D-Mass.), an early and influential member of the OTA, defended the agency until the bitter end. In a July 1995 speech on the Senate floor, Kennedy emphasized the importance of assessment as technology became complicated:

In the years ahead, as we move into the 21st century, there will be even greater need to rely on OTA for impartial assessment of technology-related policies. The world of science and its impact on public policy are becoming more complex, not less. Technology is central to every aspect of American life, from biotechnology to law enforcement, from agriculture to education. It would be a serious mistake to limit our ability as a legislature to evaluate and respond to the scientific and technological challenges facing Congress, the Administration, and the Nation.

More recently, a survey by Federal News Radio confirmed Kennedy's fears that technology would become too complex for Congress to understand and implement:

An exclusive Federal News Radio survey of nearly 1,000 federal employees and contractors, revealed a clear lack of confidence in Congress' ability to legislate and oversee federal technology efforts. "These are technological illiterates," one respondent wrote. "For the kind of legislation needed in these high-tech areas, Congress may as well be debating the logistics of brain surgery," wrote another.

The OTA may not be the answer to today's IT problems, but it stands to reason that Congress is in need of unbiased, useful information about technology. Currently, the Government Accountability Office's Center for Science, Technology, and Engineering handles assessment. Federal News Radio points out that the department employs five people, compared with the 200 staffers that made up the OTA at its peak.

There have been a number of attempts to resurrect the OTA, but no one has been able to convince Congress to invest during a time when cuts are more appealing. It seems the common public-sector maxim "Do more with less" has gone too far, leaving members of Congress to make important decisions with less information.