A White House effort to improve the way agencies conduct their programs has been underway for nearly a year, but it remains to be seen whether it will work. In December 2013, the Office of Management and Budget issued a revision to OMB Circular A-131 on value engineering, which superseded guidance published in 1993. The revision requires federal agencies to use VE to reduce program and acquisition costs, improve performance, enhance quality and foster the use of innovation.

What Is Value Engineering?

VE is a systematic method to improve the value of products and services by examining function. Value is the ratio of function to cost. Value can be increased either by improving function or reducing cost. VE began at General Electric during World War II to deal with shortages in skilled labor, raw materials and parts. It became a systematic process as the original creators of VE noticed that substitutions they made due to shortages often resulted in reduced costs or product improvements.

SOURCE: Notice of Final Revision to Office of Management and Budget Circular No. A–131, "Value Engineering'' (Federal Register, December 26, 2013)

The construction and manufacturing industries have made extensive use of VE. Its application has been most effective during the early programming and design phases of projects when functionality and performance criteria are first being defined and developed. When applied later, generally prompted by a budget crisis, cost reductions most often adversely affect both expected functionality and performance.

OMB's revised Circular A-131 guidance requires agencies to "consider and use VE as a management tool to ensure realistic budgets, identify and remove nonessential capital and operating costs, and improve and maintain acceptable quality in program and acquisition functions."

In implementing this policy, agencies are required to designate a senior accountable official to:

The revised VE policy looks to be another well-intentioned OMB program to legislate good management. If the past is any predictor of the future, agencies will comply with the policy by addressing the key elements in the circular. The consultants that help them will be pleased to assist, and the annual reports to OMB will document numerous activities and significant savings.

We have seen this same cycle with past improvement efforts that turned out to be fads that had no lasting impact, such as Total Quality Management or Lean Six Sigma. OMB pushed these efforts across government, and while each of them produced pockets of success, they had no deep or lasting impact. I believe most agencies will comply with the policy without sufficient conviction or enthusiasm, and as a result, VE is not likely to have much success with federal IT and systems integration.

From my perspective, rather than trying to reinvigor­ate the VE program, OMB would make much more headway by increasing its push on key strategies to consolidate federal IT (such as cloud computing and development environments) and facilitating targeted investments in key areas of innovation (such as mobility and Big Data).

That work has been underway for some time, and with stronger implementation leadership, promises significant functional improvements and cost savings. 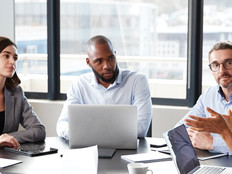