Thomas Killion is the acting director of the Office of Technology at the Office of Naval Research, where he manages a number of high-profile programs, including Future Naval Capabilities and the Small Business Innovation Research and Manufacturing Technology program.Killion spoke with FedTech Magazine managing editor David Stegon about where the Navy is focusing its science and technology efforts.

FEDTECH: What technologies that the Navy is working on are you most excited about?

KILLION: It’s hard to pick specific things, but instead I’ll highlight two areas that are a major part of our science and technology strategy that we see an amazing amount of potential: autonomy and electromagnetic maneuver warfare. 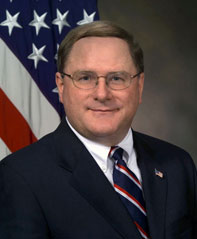 In the autonomy arena, I’ve been around unmanned vehicles for a long time, dating back to the original UAV joint project office in the late eighties. The levels of intelligence we are seeing that can be achieved in these systems are fascinating. We’re working on systems that can collaborate and interact with the outside world and really create larger collaborative teams that require a smaller footprint in terms of human guidance. If you have a person piloting an unmanned vehicle, you still have a person needed to constantly control them. What we are moving to is having an autonomous system guide a swarm, or a team of systems with a single person controlling multiple platforms.

The other area is electromagnetic maneuver warfare. That’s a relatively new topic that is about controlling the electromagnetic spectrum much more effectively. Traditional electronic warfare is part of that, but this includes how we manage our own electromagnetic signals. That’s something that will be critical for us in operating in contested environments, to survive and perform critical missions. There’s a growing capability to really coordinate multiple systems to work against our enemies’ sensors and systems.

FEDTECH: How much does the Navy pay attention to science and technology developments in the commercial marketplace? They seem to always be coming up with cool stuff.

KILLION: We absolutely watch what they do. Take the two domains I just talked about in terms of autonomy and electromagnetic systems. In the autonomy arena, part of what’s driving the robotics revolution is industrial and commercial robotics. Look at the Roomba vacuum cleaner; it’s not your robot servant, but he will clean your floor. He doesn’t require a lot of intelligence, but he can do a critical task in a simplistic way to keep your floors clean.

That thinking process is where the commercial domain is going to expand the envelope of tasks that those kinds of robotic systems can perform, and do so in a way that’s safe and effective in an environment where they’re surrounded by humans and other systems. That’s exactly the thought process that we have to work with in the midterm. So we will glean ideas from the commercial marketplace and then insert those into our systems.

FEDTECH: I know a big part of your background is in biometrics and identity management.

KILLION: It was one of my assignments and something we continue to research at ONR in areas like facial recognition. We want to be able to get a picture from a video stream and identify a person automatically, which can be a real challenge. Obviously, cameras feature a wide range of quality, and people are pictured from different angles, so it’s an incredibly complex problem — but one we’re making progress on.

In the past, biometric measurements tended to be very fragile — that is, they had to exactly match an original sample in order to be recognized. To get a good iris scan, I had to go right up to the camera and open my eye wide in order to get the right picture, for it to work properly. The same was true for facial recognition, where even a three-day beard could cause the system to not recognize me. In recent times, we’re seeing great advances and new algorithms that are able to take limited information and turn it into a 3D model that can be used to reliably determine who that individual is. It’s still a rapidly evolving technology, with much of the work being driven by the commercial sector.

KILLION: There are always new things to get into. Let’s go back to the first area, autonomy, and consider how unmanned systems can do a wide spectrum of things that you can’t do with a manned system. Another example is the Internet of Things.  Soon, everything is going to be connected to the Net. Your refrigerator is going to be on the Net and will send you a message when you’re low on milk. The question for us is, how do we take advantage of it? How can we take advantage of the assets that are already organic to the environment and find a way to use that information?