From left: Camille Tuutti of Nextgov; Maria Roat of the Small Business Administration; Joyce Hunter, formerly of the Agriculture Department, Veronica Villalobos of OPM; and Kay Ely of GSA.

Women in federal IT also need to be more willing to embrace challenges and go outside their comfort zone, several speakers on the panel said Thursday at AFFIRM’s monthly speaker series in Washington, D.C.

Recruiting More Women to Federal IT

Women and minorities are not aware that many of these opportunities exist and few people from the government have reached out to them, Villalobos said. Villalobos, who worked in OPM’s office of diversity and inclusion from 2010 to 2015, said hiring managers in STEM fields need to actively recruit more women by speaking to career counselors and others who work with young women. “Be that example” for the next generation to follow, she said. “When people get asked, that’s when they come to the table.”

Joyce Hunter, the former deputy CIO in the office of policy and planning at the Agriculture Department, said that agencies need to recruit young women and get them interested in technology. She noted that during her tenure USDA opened a summer camp for inner city kids ages 11 to 16 called STEAM (STEM with an added ‘A’ for agriculture). The camp introduces kids to Big Data, data analytics and agriculture (including urban agriculture, urban forestry and food safety). Hunter said the camp encourages children from diverse backgrounds to get involved in government IT and also teaches them life skills like how to make and dress for a presentation. “Halfway through the program, I get calls saying, ‘What did you do to my child?’ ” Hunter said to laughter. “This is a way of getting them into the pipeline early."

In 2015, the camp had 30 students. In 2016, that number grew to 40, with five of the original 30 returning. One student decided she wanted to study insects as an entomologist and was recruited by Florida A&M University, Hunter said, but decided to go to Bryn Mawr College, which has one of the strongest track records of graduating female scientists.

Kay Ely, deputy assistant commissioner of the office of Integrated Technology Services at the General Service Administration federal acquisition service, said that government officials “have a great story to tell” about the missions they perform and services they provide to citizens.

“I don’t think we tell our story enough,” she said. “We have to get to the hearts and minds.”

A Different Environment for Women in Federal IT

The panelists acknowledged that there is a paucity of women in federal IT positions. Maria Roat, CIO of the Small Business Administration, who became interested in computers in high school and worked on her first computer code in 1979, joined the Navy in 1981. She said that being stationed on shore in Norfolk, Va., made it inconsequential whether you were male or female; everyone had a job to do and did it.

When Roat started her civil service career in the 1980s she worked with other women on mainframe computers. When she moved to work on PCs and in networking in the 1990s she found fewer and fewer women beside her.

“I came of age in an environment where it didn’t matter. I didn’t pay attention to it,” Roat said. “I just kept going. I see it now, where there were differences.”

Roat noted that as an IT team leader early in her career, she felt satisfaction when men on her team would pose a question to other men. “To their credit they would point to me, because I was the technical expert and I was the team lead on that,” she said.

Several officials said that women needed to step outside their comfort zones to get ahead in federal IT. Hunter received a bachelor’s degree in sociology and a master’s of business administration degree in marketing. When she entered government after graduate school, Hunter, who is black, said there were very few people “that looked like me that were in positions of authority.” People would often not pay attention to her points or would sometimes garner praise by repeating points that Hunter had made earlier in the discussion.

“I decided that early on I was going to think outside of the box,” she said.

Ely agreed with that viewpoint. “There’s no comfort in your growth zone, and there’s no growth in your comfort zone,” she said. “Always be challenging yourself.” 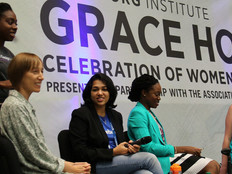 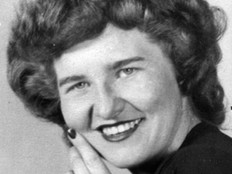