With the Modernizing Government Technology Act finally on the verge of becoming law, the idea of IT modernization is becoming more concrete.

The MGT Act would, as FedScoop reports, let agencies “put money saved through IT efficiencies into working capital funds, which can be accessed for up to three years, to fund efforts to modernize their technology. It also would create a centralized fund that agencies can tap into for modernization.”

Speaking to FedTech at the recent ACT-IAC Executive Leadership Conference in Williamsburg, Va., federal IT leaders said that shifting away from legacy IT hardware will be a key element of upgrades, along with shifting to the cloud. And while Rep. Will Hurd, a driving force behind the MGT Act in Congress, is fond of saying that the cloud is not an emerging technology anymore, many agencies are still in the midst of migrations.

Shift Resources to the Cloud

Christopher Wlaschin, CISO of the Health and Human Services Department, said that to him, IT modernization means moving away from legacy IT services and hardware that vendor partners and software developers can no longer maintain.

“We need to invest in getting rid of that legacy IT and moving it to the cloud, modernizing the hardware that it’s on or decommissioning it and getting it off the network,” he said.

Why? Legacy IT “represents a continuing and ongoing vulnerability,” Wlaschin said. “And our attack surface is too big.”

HHS is spending too much money to try and mitigate the threats from legacy IT, he said. HHS CIO Beth Killoran, working with the CIOs across the agency’s operating divisions, has developed a list of priorities for modernization, according to Wlaschin. He added that HHS looks forward to the MGT Act becoming law “and taking advantage of the legislative authorities and money available to help modernize the HHS network.”

HHS is not the only agency pushing for cloud migrations. H. Lionel Cares, the Bureau of Alcohol, Tobacco, Firearms and Explosives’ data center services branch chief, said that the Justice Department unit is “dealing with a not ancient but more antiquated infrastructure.”

Moving to cloud services for tasks such as data storage will be part of ATF’s modernization efforts, he said. By roughly the end of October 2018, ATF expects to no longer be operating its on-premises data center, Cares said.

Numerous agencies collect reams of data from all over the country. NASA, of course, even collects data from space.

John Sprague, deputy associate CIO for technology and innovation at NASA, said data is where he wants to keep pushing for innovation because “data becomes information, information becomes knowledge and knowledge becomes wisdom.”

NASA’s satellites probe beam information back to Earth every day, he noted, and the agency needs to figure out better ways to store, secure and analyze it all. “We don’t want to lose it,” he said. “We did a lot of work to get the satellite or probe up there, or an instrument on Mars. All of that data, we have to have a place to store it, and storage gets expensive when you’ve got a lot of it.”

NASA’s Big Data Working Group is one of the ways the agency is looking to figure out better ways to do all of that. The group, Sprague said, allows different components of the agency to “share the best practices across all of NASA.”

Most agencies are more Earth-bound, including the National Archives and Records Administration, which manages not only foundational documents such as the Declaration of Independence, but also legally and historically important documents from agencies.

However, NARA will need to upgrade its technology to accomplish those goals, Paul-Blanc said.

“We have some aging technology in terms of networking,” she said. “The National Archives has to be able to make those records available to the public, and the thing is that you have to have the infrastructure to get that done.”

For more, check out this video from ELC and all of our ELC 2017 coverage. 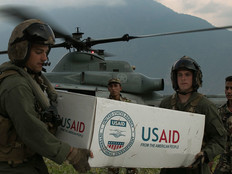