Cloud deployments are picking up steam across the government. However, barriers remain to rollouts.

Beyond technical best practices, agency IT leaders must adopt changes to their culture and management style. That was a key message from Michael Fairless, branch chief of the Securities and Exchange Commission, who spoke at FCW's "Security Innovation in the Cloud" workshop on Jan. 30 in Washington, D.C.

"The goal of federal cloud services should be to have a customer meeting on Monday and eight days later have a complete solution that gives that customer everything they need," Fairless said. "I'm not sure we can get to that world in the government, but I'd like to think we can at least try."

To achieve that velocity, agencies must change how they approach technology innovation.

"Culture is a huge driver," Fairless said, calling it the "biggest challenge the government faces."

A key cultural challenge is that IT workers "don't speak a common language when it comes to the cloud" because every cloud service provider (CSP) has a "unique and proprietary language and solution that all to do same thing in a different way," Fairless added.

Cloud workers need to learn how to translate from one model or CSP to another, Fairless said. "We must eliminate ambiguity," he added. "Otherwise, we will build things that cost a lot of money but won't deliver a lot of value." 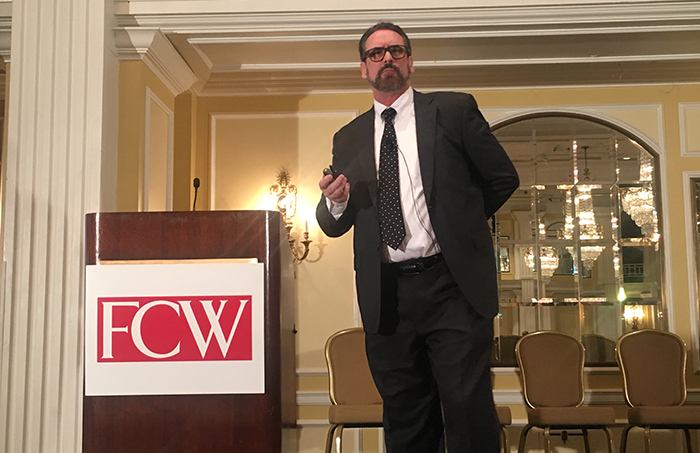 Michael Fairless, branch chief of the Securities and Exchange Commission, discusses the cloud.

Agencies must also increase the number of IT workers who are programmers since about half of all cloud IT roles will be filled by programmers, according to Fairless. "If people aren't learning to program, it might be something we want to start doing now," he said.

Additionally, Fairless suggested that agencies start thinking like cloud brokers. "How are we going to build services out so that we are meeting customers' needs, delivering those services in a timely fashion, and ultimately, that they are safe, secure and easy to use?" he said.

Last spring, Fairless said he asked his superiors to get the authority, direction and resources to ramp up cloud deployments. He also wanted to operate on a week-by-week basis. Fairless and his team — just 12 people at its peak — were given the go-ahead and expected to produce results.

For every agency, he said, a key goal should be to "put innovators in front of the problem," and for those workers who aren't excited about change, "get them excited about it."