The Air Force relies on its planes to be aerodynamic and fast to accomplish its mission. It wants its IT to behave the same way.

Earlier this month, the service branch released a request for information on how it can consolidate some of its IT functions and move to a model that includes an enterprise service desk as well as Device as a Service delivery. Essentially, the service wants to use commercial technology to free up its personnel to do more mission-critical work, including cybersecurity, part of the Air Force’s larger Enterprise IT as a Service shift.

Starting in October, the Air Force will experiment at a portion of its bases around the globe to “leverage commercially owned and operated IT services at those bases to learn and adjust before transitioning to the rest of the AF starting in 2020,” the RFI states.

Ultimately, the goal is to improve the IT user experience through commercial services in order to increase mission effectiveness, according to the Air Force.

Air Force to Experiment with Combining IT Roles

The Air Force wants to “consolidate multiple disparate expenditures and IT projects into a consolidated enterprise while still allowing the users to retain the ability to tailor their services and service levels,” according to the RFI.

To do that, the service wants to partner with vendors to “provide commercial IT services, improve performance of Air Force IT services, and allow re-missioning of military personnel to cyber warfighting missions.”

According to the RFI, the Air Force has numerous goals for the shift. The primary one is to improve cybersecurity, but the service branch also wants to enhance the reliability and availability of IT services and the latest technology.

Further, the Air Force aims to get clarity on the real cost of IT services and its ability to manage them in a cost-effective manner, including assuring that its cost basis per user is reasonable and accurate. The Air Force also wants to improve end-user satisfaction and the effectiveness of its operations across all of its missions and business areas.

To conduct the experiment, the Air Force picked a representative sample of up to 20 out of its 187 bases globally to test the Enterprise IT as a Service model. “The Air Force intends to integrate those installations into EITaaS services and measure the impact of each service on prescribed variables,” the RFI notes.

“The strategic intent is to focus on our core competency,” Bill Marion, now deputy CIO of the Air Force, said in April, FedScoop reports. “Our core competency is ‘fly, fight, win’ in air and space. It is not to run email servers or configure desktop devices.” 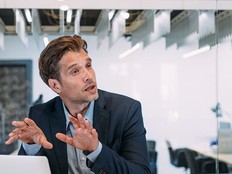