The Air Force wants its IT personnel to drop the responsibilities of a help desk worker to take on the duties of a cyberwarrior.

The service branch is undertaking a massive reorientation of its IT staff so that they focus less on day-to-day technology maintenance and operations and more on cybersecurity. The goal is to get the Air Force’s IT staff working on their core competencies related to the Air Force’s weapons systems and mission, and less on more mundane IT tasks. As part of the effort, the Air Force is outsourcing much of its IT operations to industry.

Lt. Gen. Bradford Shwedo, chief of information dominance and CIO for the Air Force, told FCW in March that the service was moving ahead with its plan to convert IT professionals at every base into mission defense teams, or MDTs. As the Air Force explains, such teams are “responsible for mission assurance at the base level” and focus “on defensive cyber operations of Air Force weapons systems.”

“We want our airmen transitioning from running email and boxes to focusing on cyberdefense,” William Marion, the Air Force’s deputy chief of information dominance and deputy CIO, tells CyberScoop. “Every time we move to the cloud, the intent is to free up cyber-operators for the Mission Defense Teams.”

The Air Force has been building up the MDT initiative since last year. As Fifth Domain reports, the teams are “specialized cyber teams within the cyber squadrons” that serve as the “beat cops” for the Air Force, “understanding the critical cyber terrain and networks of the wings and missions they’re assigned to.” Lt. Col. Steven Wieland, chief of the strategy branch within the Air Force’s chief information office, tells Fifth Domain the teams are an organic capability to Air Force wings, or command units, within the squadron structure.

The Air Force in recent months has been sounding out notes about its willingness and need to outsource enterprise IT.

According to FCW, Shwedo said in February at an AFCEA event in Arlington, Va., that the Air Force is seeing “more and more bad guys using cyber as an asymmetrical attack access. So how do I get more guns to the fight? Enterprise IT as a Service.”

Outsourcing IT to contractors and industry is not just a cost-saving measure for Shwedo. It enables the Air Force to allow its personnel to actually take part in mission-specific cyberdefense. “I need to use blue suiters where blue suiters are suited for,” he said. “I can get contractors to do enterprise IT; I can’t get contractors to attack or exploit,” per the laws of armed conflict, FCW reports.

Shwedo said that moving to an IT as a Service model would also allow the Air Force to better focus its training for IT personnel, because “the skills associated with running Enterprise IT as a Service and getting in a cyber dogfight are too different.”

Speaking on March 6 after a panel discussion on disruptive technologies at the National Defense Industrial Association’s cyber symposium in McLean, Va., Shwedo said the personnel on the MDTs were still splitting their time between cyberdefense and traditional IT roles.

“The bottom line is I’m going to pay a price per seat for every one of [my IT staff members], and we are converting our whole basically [IT team] into cyber folks, and we’re going to start getting after the weapons systems,” Shwedo said during his panel, according to FCW. “Whatever base they’re at, they’re going to hover over that weapons system, and their job is to get after the back doors of the weapons systems in that base, all the industrial control systems, etc.”

Freeing Up IT Staff to Focus on Cybersecurity

As the Air Force moves personnel toward cybersecurity, it is turning to industry to pick up the slack.

As CyberScoop reports, the Air Force’s plan includes the biggest Microsoft Office 365 enterprise in the world, a $293 million Oracle cloud system and a $1 billion spend on a mass cloud migration over the next five years. 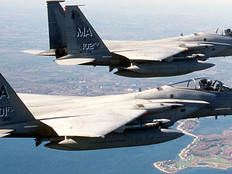