The Farm Credit Administration has a long experience supporting remote work for its employees; many of them conduct audits of federal farm loans, which requires them to travel extensively and complete tasks via mobile devices and applications.

Still, FCA tech leaders were unsure if they could accommodate the agency’s entire workforce working remotely at the same time. The agency quickly adopted Cisco Webex, relying on its user support team to help with any issues. Within several weeks, the FCA held a virtual board meeting using the solution, followed by a 172-person all-hands meeting.

CIO Jerry Golley initially harbored doubts about how well employees would be able to collaborate from their homes, but people quickly proved their ability to adapt to rapidly changing circumstances. Golley talks about why experience will likely change the nature of work at the agency for years to come. 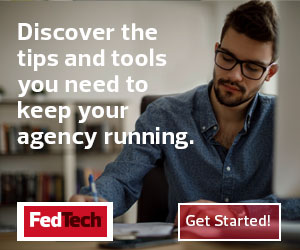 GOLLEY: A large portion of our staff does audits, and they travel a lot. It’s not necessarily telework per se, but it’s a mobile workforce. We also have a large portion of people who will telework one day or so per pay period. A large number of people were mobile-ready. But what we didn’t know was if we could support everybody teleworking simultaneously. In our previous time, we might have had half the agency at any one time working remotely, at its peak. So to go to 100 percent of the staff teleworking was a test. We passed the test.

We thought bandwidth might be an issue, and we suspected a limit on VPN connections and management. In fact, there was a limit. When we reached 255 — 255 is, of course, a magic binary number — we had to change our addressing configuration to support more than 255.

FEDTECH: What IT situations arose that you did not expect? How did you handle them?

GOLLEY: Everybody immediately wanted to videoconference. We had an internal video tool, Skype for Business, and then people started using their own Zoom. We made a decision to go with Webex. We worked with Cisco to quickly purchase a video tool and enable it for everyone to access quickly. A couple of other things we had to do — for instance, we had paper processes, and staffers were happy with the paper processes, but as soon as everybody was at home, it became a requirement that we automate and digitize those processes, which we were able to do quickly. Specifically, it was package routing. There might be a situation where a policy would have to be reviewed and signed by the COO or chairman. Typically, we’d have a cover sheet put on the package as it was routed from one director to another, and everybody would review it and sign it. We created a workflow that simulated that experience with a digital process, so you could attach a file to the workflow and then pass the object from person to person and have the same experience that you would have manually.

MORE FROM FEDTECH: Learn more about the tech your agency will need to continue teleworking smoothly.

GOLLEY: It took a little bit of time, but not much — maybe a week. We had a user support team that was on call anytime, day or night, to help with any problems. That team was already in place; it was our standard user support team. But the thing that was a surprise is that we moved them all to working from home. I was really impressed with how focused the team was working from home. They’d been a good team, working in the office, but it was limited to the hours during the day. Working from home, they stepped up, they learned the new technologies quickly and met needs as people had them. We had our first virtual board meeting using Webex in April. Everyone, including the chairman, participated in that meeting from home using Webex. To prepare, we did a couple of practice sessions where we got everybody to do it a couple of times in practice. So by the time it happened for real, it was a pretty seamless and enjoyable experience. We had another big meeting, 172 people participating in a Webex all-hands meeting. For the most part, we had no problems. But there were a few people who had local or in-house network issues, and that disrupts everybody.

“I’m a firm believer that 80 percent of the job is showing up … but you can show up at home, too.”

FEDTECH: What’s different about teleworking compared with working in the office?

GOLLEY: I find myself working harder. I’m glued to my chair all day long, dealing with issues. I’m a manager who likes to manage by walking around. I find myself working longer hours in the day and just thinking, ‘Hey, what’s going on on the computer now?’ at 6:00 p.m. or 8:00 p.m. I think that’s a common experience too.

GOLLEY: Our business continuity plan is high-level to protect against everything from whole-building crashes to an individual service becoming unavailable. Once, we lost power to the server room, and we lost all of our servers for about two days before we were able to get those back up. So everybody went to mobile, and we were able to execute then. We lost our shared drives last year, for about three days. We recovered our shared drives from a backup, but they were so big that it took literally two days to move the files. That was something we hadn’t anticipated. The lesson learned there was, it taught us how to deal with communication and how to be inconvenienced when things don’t work just right. Everybody has been really patient and understanding.

FEDTECH: Were you worried at all that productivity would take a hit?

GOLLEY: I was. I’m a firm believer that 80 percent of the job is showing up, and then you figure out what happens during the day and you solve it. But you can show up at home too. The same rule applies. Even though they’re working from home, everybody is showing up and being there and solving the problems as they occur, and being very patient and working together to get things done.

GOLLEY: We had a really good and robust vulnerability management process, a weekly security briefing, even before this pandemic happened. We’ve maintained those security briefings. We’ve asked ourselves how security has changed because of this, and we’ve tried to address those issues and concerns and risks. We have agents on the laptops scanning for vulnerabilities and malicious software remotely, and then reporting back whenever they connect with our domain. We are getting alerts all the time telling us all the things that are going on. We got an alert that there are phishing attacks coming from a specific email address domain, and so we immediately blocked that email address. Server patching and laptop patching haven’t stopped or slowed down. We’re as aggressive as ever to make sure everything is patched and up to date. 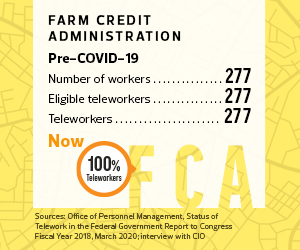 FEDTECH: Did your agency do any practice runs or other failover type events to prepare for this kind of interruption in continuity?

GOLLEY: I don’t think we ever really anticipated this kind of disruption. We said, a couple days before everybody did go to telework, that we should do a practice day. So we practiced it, I think, on March 12 and went live with it on March 13. It just happened so quickly.

GOLLEY: I think this will definitely change our policies. First of all, what is going back to normal going to look like? We’re going to have to be cautious for a long time, and things are going to be different. We’re impressed with how much people have stepped up and continued to do the work, despite the distractions and the stress of being at home, and the kids being at home.

The fact that you can get on the road now, and there aren’t traffic jams everywhere, I think everybody sees that as a really good thing. If we can reduce the carbon footprint by working from home and getting things done, and still have good communication, I personally think it will change not only how our agency functions, but probably how the government and commercial entities work as well. Working from home really didn’t put much of a stop on our capability to do the job. I was surprised by how well it’s gone. 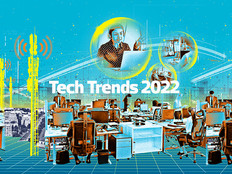 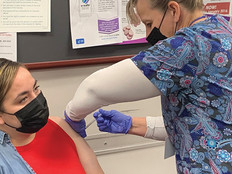 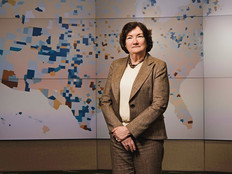