The workplace experience gained from quick and flexible response to the COVID-19 pandemic will inform the way agencies operate once the pandemic eases, according to federal IT and personnel experts.

At the ReImagine Nation ELC 2020 conference this week, a series of panels took a look at lessons learned from the pivot to remote work. From better team collaboration and unexpected support for remote work to new ways to fill open positions, many of the new practices will stick — not just because technology supports them, but because people want them.

Previously, “the technology may have been pulling people in a way they didn’t need to go, and need propels change,” said National Science Foundation CIO Dorothy Aronson. “Everyone can change overnight when they need to.” 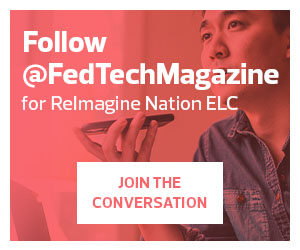 Skeptical Agencies Signed On for Telework

About three-quarters of federal workers were still working remotely in September, according to a survey by the Government Business Council. Many, however, have jobs that do not allow them to work remotely, such as airport screeners, border patrol agents, healthcare workers and those who deal with classified information.

“In the past, we’ve seen resistance to telework because we have such a large population that doesn’t or can’t,” said Jasmine Avila, cybersecurity training and policy branch chief for U.S. Customs and Border Protection. “But we were able to transfer our administrative staff to 100 percent telework.”

CBP did it with the basic practices followed by all agencies: adding virtual private network capacity, laptops and team collaboration tools such as — in CBP’s case — Cisco Webex, she said. “It has shifted our attitude,” she added. “We’ve seen a lot of positivity come from senior leadership that hadn’t been as telework-friendly before.”

The challenges now are less technological than personal, many of the panelists said. “It’s hard to figure out how to adapt a leadership style to that remote space,” said Brian Whittaker, director of design and development for the Consumer Financial Protection Bureau. “The impromptu opportunities for discussion go away.”

“Work from home looks like fun, but it takes a lot of effort,” said Uchenna Moka-Solana, acting executive director of 18F, the digital services agency within the General Services Administration. “You forget about those lulls in the day — you have to remember to give people space to breathe.”

Hiring practices may also change now that more remote work is a proven option; federal officials have long said that allowing remote work will attract people who might not want to work for the government otherwise, and opens the talent pool to people who want federal jobs but don’t want to move to larger cities.

“We need to change our minds about how we look at people,” said Shila Cooch, director of IT policy in the Office of the Federal CIO. “We’re not just filling holes anymore.”

Prospective candidates are also looking for other forms of flexibility, she said, including job sharing, the ability to move easily from agency to agency and the chance to develop useful new skills that don’t always correlate to their current jobs.

A federal cyber reskilling program that launched in 2019 attracted about 1,500 applicants for 30 slots — a testament to the desire for new skills and additional training.

“A lot of people who were interested in cyber reskilling just got into it because ‘cyber’ was a buzzword,” Cooch said. “They didn’t even know if they could do it. Turns out, they were excellent.”

While not all of those reskilled workers were able to move to new jobs — federal hiring practices and pay scale differences slowed down that process — government officials realized that training people they already had was still faster than hiring new talent.

With current employees, there’s no need for new security clearances or interviews, and “staff who are already part of the mission are more apt to jump to learn a new skill,” said Cooch.

LEARN MORE: How can technology help government adapt to the future of work?

A new data science reskilling program, which launched in August, has attracted similar attention. The structure of the data program is different than the full-time cyber reskilling project; because the pandemic had put a strain on resources, trainees continue to do their day jobs at their current agency while taking virtual training eight hours a week.

Cooch said that the plan is to develop a training program that can be sent to agencies so that they can do the reskilling themselves; that should enable more people to participate. Data science “is something that is a needed skill set in organizations,” she said.

Deputy Federal CIO Maria Roat wants agencies to think even more broadly about ways to attract new talent and retain what they already have. One way to keep people on board, she said, is to improve the tools they have to work with.

New web pages running on outdated application programming interfaces, legacy equipment that can’t keep up with citizen demand — these things have to evolve, she said.

“This year, CIOs did an incredible job,” she said, referring to the massive switch to telework as the pandemic began. “What was really clear, though, was that we have to do sustainable, long-term modernization. Without that, we’re holding agencies back.”