The U.S. Census Bureau worked with CDW•G to configure iPhone 8 devices for its enumerators for the 2020 census count.

Agencies across government often roll out large numbers of devices to users, usually for specific purposes but also to enable them to complete their missions. Examples range from the Coast Guard deploying two-in-one tablets for personnel on its cutters to the Department of Veterans Affairs investing in laptops, iPad devices and other equipment to support telemedicine during the coronavirus pandemic.

Some agencies find that they simply do not have the staff or time to configure new devices or technology that could make their missions more effective, and so they turn to their vendor partners’ configuration teams to do the job for them.

The Census Bureau did just this when it contracted with CDW•G to use a Device as a Service solution to gather information from U.S. residents for the 2020 decennial census in the field.

As a result of that partnership, the only responsibilities bureau officials had with regard to the iPhones enumerators used were to unpack them, hand them out and ship them back — a highly attractive prospect for the agency, given the critical nature of the count and the complexities of performing it during a once-in-a-century pandemic.

According to a recent Government Accountability Office report, the Census Bureau said its use of technology was one of the reasons it was able to complete more than 99 percent of nonresponse follow-up cases by Oct. 15, 2020.

Few projects are as large in scale and scope as the census count, but agency IT leaders can learn a great deal from how devices were configured for it. To get the benefits of device configuration services, agencies need to strike true and deep partnerships with their vendors and plan ahead with them for how to address any difficulties that might arise in the deployment process. 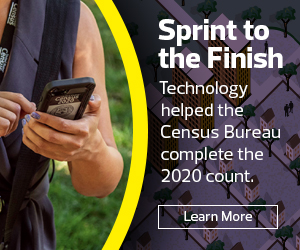 How Configuration Services Can Aid Agencies

What is Configuration Services, and how can it help agencies? The CDW Configuration Services team is in charge of preprovisioning all of the hardware sold by CDW. That covers tasks as simple as putting an asset tag on a device or as complex as building a fully populated rack for an agency’s data center.

CDW•G’s partnership with the Census Bureau started in 2016, when planning began for rolling out the devices that would be used for the first-ever digital census. Initially, that involved device provisioning, creating custom packaging for the devices and ensuring the best user experience for enumerators.

For four years, CDW•G worked with the Census Bureau to learn what its needs were and where the devices needed to go. Until devices started shipping, CDW•G was updating its systems and creating new processes to ensure the devices would flow to enumerators as smoothly as possible.

CDW•G worked directly with the Census Bureau and its tactical integrator to deploy the needed smartphone applications to the enumerators’ iPhones — a task that had to be scaled to hundreds of thousands of devices.

A lot of work — much of it automated — went into customizing the devices’ setup so that they would be ready to use out of the box. The devices were also secured from the start and locked to the Census Bureau’s management system when they came from Apple. When the devices were powered on, they could only contact Apple and be used to access Census Bureau services. CDW•G provisioned the devices with extra security layers and password protection.

Once enumerators removed their iPhones from the box, all they had to do was log in, follow the training material, click the census app and start entering data as they went door to door. The data was then automatically transferred to the cloud, where it was collected by the Census Bureau.

Lessons for Government IT Leaders Ahead of Device Deployments

Although the Census Bureau project was unique, there are some clear lessons that IT leaders can draw from the deployment as they consider using configuration services.

The most important: Agencies should develop and maintain strong, open partnerships with their vendors. Trust is crucial when it involves the rollout of mission-critical devices.

Such projects often involve a lot of changes, so it’s critical for agencies to have a change control process in place and clear lines of communication with vendor partners to rigorously verify changes, large and small, on either side of the partnership.

Another key lesson is to plan as far ahead as possible. All stakeholders need to be involved early in the process. If the agency intends to deploy tens of thousands of devices — or more — ideally, that should not be determined with just a few months to spare before the devices are needed. It’s important for IT leaders to settle on hardware models early in the process and then start provisioning them, knowing that updated software images can be downloaded to devices over the air. Given that likelihood, agencies and their vendor partners should also invest in the bandwidth and networking capabilities needed to wirelessly provision devices at scale.

Agencies also need to anticipate where they may have gaps, where points in the process might break down and how those issues can be resolved with their partners. That may mean leaning on the IT department, procurement specialists, finance or other subject area experts.

These relationships need to be partnerships, and all parties need to be up front and realistic about the time frames and capabilities of the deployment so that the rollout will be successful and the agency will be able to achieve its mission.