The deadline for federal agencies to switch over to their networks of the future is fast approaching, and several large ones are starting to get a move on.

In late May, the DHS award was revealed, and is worth $306 million over 12 years if all of the options are exercised. Last week, the VA award was announced, worth $725 million over 12 years. Taken together, they represent momentum behind network upgrades to modern, IP-based technologies under EIS, though the agencies’ approaches to network improvements differ.

EIS, which is designed to let agencies modernize their networks, especially via technologies such as software-defined networking and 5G wireless networks, replaces the existing Networx contract. Agencies had been required to transition away from the Networx contracting vehicle to EIS by the spring of 2020. However, in December 2018, the GSA extended the deadline to 2023 to give agencies more time to switch.

According to the GSA, by March 31, 2022, 90 percent of agencies’ telecom inventory must be off current contracts and moved to EIS. Current Networx, WITS and Local Service Agreement telecom contracts expire on May 31, 2023. 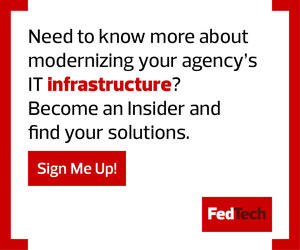 DHS awarded AT&T four task orders to deploy IP-based networking service for its headquarters and for three components: Immigration and Customs Enforcement, the Cybersecurity and Infrastructure Security Agency and the agency’s Science and Technology Directorate.

AT&T said in a release that the orders “pave the way for DHS to access a full spectrum of flexible products and services including data networking, voice collaboration, equipment, security and labor.” They also provide DHS the option to access the First Responder Network Authority, or FirstNet, the nationwide public safety broadband network for first responders.

DHS will use AT&T to “virtualize its networking capabilities,” according to the release, and will work with the carrier on deploying “IP software-based networking capabilities, SD-WAN, cybersecurity protections that reduce the number of internet connections for improved monitoring and zero-trust networking to help ensure only valid users have network access.”

“These capabilities can help DHS transform and secure its network to meet current and future connectivity demands in the service of its mission,” AT&T said.

Stacy Schwartz, AT&T vice president for FirstNet and public safety, tells Fierce Telecom that the company will also provide networking support for two “very large data centers” used by all DHS components for email and mission-critical applications. AT&T says it is working with DHS on prioritizing, organizing and transforming the agency’s networking environment to meet its mission.

VA Could Expand Use of 5G Networking

The VA serves veterans across the country, and therefore requires a “high speed, high capacity and resilient urban and rural data network,” AT&T notes in a release.

The agency offers healthcare and benefits to 18 million veterans and their families and is responsible for 142 national cemeteries and shrines, according to the release. It manages America’s largest integrated healthcare system, providing care at 1,255 healthcare facilities, including 1,244 total medical centers and outpatient sites of care.

AT&T says it will work with the VA to “continuously transform its IP-based data network to exceed its goals of a highly secure, scalable, highly available, and resilient technology infrastructure that can enable rapid cloud adoption.” The agency is working with AT&T on WAN upgrades, VPN services and managed network services.

“VA is continuing to explore and innovate with advancing technologies to help us provide exceptional customer service to our nation’s veterans,” says Daniel Mesimer, director of WAN/LAN infrastructure engineering and provisioning solution delivery in the VA’s Office of Information and Technology.

Chris Smith, AT&T vice president of civilian and shared services, tells Fierce Telecom that as a result of the upgrade, the VA will be able to adopt digital record sharing and medical imaging, improve asset tracking for key equipment and expand telehealth services, and offer guest Wi-Fi in its hospitals. AT&T, Smith adds, is in “active discussions” about deploying 5G and mobile edge computing capabilities for the agency, which could even enable use cases such as remote surgery. The VA has been testing 5G to develop and validate healthcare applications that could improve patient care.

“Having this resilient, adaptive network platform to help them modernize healthcare within their facilities … is critically important,” Smith says. “We’ve already begun work with them under the EIS awards and are well on the way to the transition and transformation. … I think you’ll see over the next 12, 18, 24 months a great deal of work to bring these newer capabilities online.”