During the presidential campaign, the Obama organization made open, participatory government a plank of its campaign platform and a differentiator as part of its “Change You Can Believe In” theme.

Now that President Obama has taken office, it’s appropriate to take a look at what is happening with respect to open government and the implications for federal IT.

Traditionally, the political and career workforce that constitutes the Executive Branch has operated in an environment where most decision-making is invisible to the citizenry. It is almost a textbook example of a large bureaucratic organization at work — integrating experts with data, policy, processes and, of course, political influence. The system is large and complex, often slow to react and generally lacking in clarity of purpose, expectations and results. And although the federal government certainly does a number of quite extraordinary things — and has shown the capacity to rise to the occasion when necessary — the public mostly views agencies as inefficient and unresponsive.

The Obama administration recently published its management agenda, aptly titled “Building a High-Performing Government.” One of the six components directly addresses the policy shift toward open government: Transparency, Technology and Participatory Democracy. To paraphrase a bit, the strategy of this component involves:

• Transparency: Federal information is a national asset to be shared with the citizens. The transparency that will result from access to information will promote accountability and greater understanding of what the government does and what it’s trying to achieve.

• Technology: Government will use technology to provide citizens with improved access to information, and to solicit and incorporate feedback.

• Participatory democracy: The result of increased access to government information will be greater interaction between citizens and government, which will promote and enable greater participation in the process of governing.

A simple comparison between traditional information access policies and those that are part of the administration’s new direction provides an understanding of the sharp contrast between where government has been and where it wants to go now.

In the near past, if you wanted information, you had to specifically ask for it. In response, the government would decide what it would (or could) release and then would charge you for it (through the Freedom of Information Act). The new plan seems to be that citizens own the information, which the government will push out aggressively using technology, while asking: What do you think about it, and will you share whatever implications you draw from it?

Certainly, government has made information available over the years through access methods less onerous than FOIA. There is a lot of data in the public domain, in libraries, on websites, in reading rooms. During the mid-90s, I personally worked on a project to push out information at the Environmental Protection Agency.

The legacy process for improving environmental protection, stated simply, was to conduct science, issue regulations, monitor compliance, litigate and attempt to recover damages or force compliance through court order where abuses were found. What happened with some frequency was that the government received a judgment in its favor, but the defendant corporation had no ability to pay damages.

EPA collects a significant amount of data related to its monitoring of pollution releases and levels at regulated facilities. It houses most of that information in databases that are inaccessible to the outside world. Gradually and, as I recall, with some level of resistance, both nongovernment organizations and the government began to make data and software for accessing and understanding this information available. The early attempts saw state and federal agencies trying to download data and software over 300-baud modems; the intent was there, but not the technology.

I also can remember several meetings at which this new innovation, the “Internet,” was demonstrated using a primitive web browser called Mosaic. Though fairly featureless in retrospect, at the time the step-up in capability was frankly startling, and I vividly remember the excitement that simple demonstration stirred in almost everyone who saw it.

Subsequently, EPA has been a leader in providing the public access to data. Although most of the laws that require the legacy process described above remain in place, and compliance is still an important part of the approach, that access to data has become integrated into the core strategy of environmental protection. Informing concerned citizens regarding the sources of pollution and the potential health effects, and leveraging their energy and passion into political action at the local level, has proved at times to be a much more effective strategy for achieving results than a compliance process that sometimes only enriched the lawyers involved.

Through its open-government initiative, the new administration wants to generate significantly higher levels of feedback and discussion between citizens and government than any of its predecessors have done. How will those communications be handled and supported? How will key points of discussion be incorporated into decision-making processes across government and within agencies? These are some basic questions for which no convenient answers are yet available. They will need to be addressed and the processes of government transformed to achieve the stated objectives.

The prospect of greatly increased transparency and higher levels of participation by citizens in the process of government signals a significant transformation — if it can be achieved. Like most change, it will involve overcoming resistance to change as well as mitigation of unintended consequences. Here are four intrinsic keys to success:

This must extend beyond the transmission of data and include support targeted at ensuring that citizens understand the data, how agencies collected it, and what they use it for now and into the future. This will create a demand for support that exceeds current requirements. Providing sufficient support will be important in improving understanding and in demonstrating that transparency and openness are worthwhile.

• Set the right pace for introducing new data and access.

The pace should be aggressive, but should not exceed the public’s capacity to absorb new information, the government’s capacity to support citizen access and the overall capacity of all involved to deal with the consequences. Like any transformation, the pace of change needs to be appropriately modulated to ensure an appropriate equilibrium can be maintained.

• Ensure appropriate security for the data, access to it and management of it.

• Create a plan for dealing with unintended consequences.

Such consequences will likely be numerous. One example occurred recently with the online forum Open Government Dialogue (opengov.ideascale.com). The intent of the forum is to foster ideas for improving transparency of government operations and data. But the discussion moved off-track when a number of participants focused their posts on President Obama’s birth certificate. This incident clearly raises a conundrum for the government as it tests the use of social media tools to engage the public: Is it possible to conduct an open online dialogue that is reasonably free from off-topic political agendas? 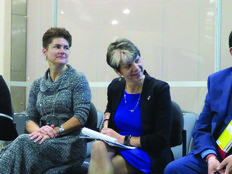