The General Services Administration is trying to be as clear as possible: Agencies should use the 15-year, $50 billion Enterprise Infrastructure Solutions contract to modernize their networks. And if they want an extension on the EIS transition deadline, they are going to have to prove they’re working toward modernization.

That was the message that Kay Ely, assistant commissioner for the GSA's Office of Information Technology Category, delivered on July 17 at a conference on EIS sponsored by FedInsider and CenturyLink, one of the main EIS contractors.

“What we have said, and we are sticking to it, is that if we just hear transition and an agency, for whatever reason, can’t even do partial transformation” or plan for modernization, then an extension would not be offered, FedScoop reports.

EIS requires agencies to transition away from the Networx contracting vehicle by the spring of 2020. Agencies will be able to take advantage of next-generation network technology through EIS — including software-defined networking and 5G wireless networks — for the foreseeable future.

GSA has not offered agencies a formal extension, but Ely said it is still being considered. "We're very aware it's an issue," Ely said, according to FCW. "We're looking at how we have conversations with stakeholders."

Still, she was unequivocal that agencies cannot just transition existing network architectures and services to similar ones if they want any kind of leeway. They must demonstrate that they will thoroughly modernize. "No modernization, no extension," she said.

Ely said wants to demonstrate to the Government Accountability Office and GSA Chief Senior Procurement Executive Jeff Koses that agencies are demonstrably leveraging EIS for modernizing their IT. "Then we'll have a conversation" about extending the deadline, she said.

To get a better idea of where agencies are in the EIS transition process, Ely said she plans to soon meet with GSA’s 70 agency representatives, and ensure they have all of the resources they need, Federal News Radio reports. 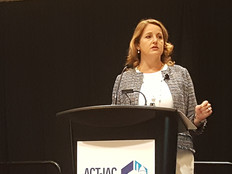