In a system serving 9 million veterans spread out across 50 states, most living 30 to 90 minutes from a veteran healthcare facility, the ability to use telemedicine tools is critical.

The Department of Veterans Affairs is increasingly using telehealth services to offer care remotely so that veterans do not need to travel to VA medical facilities.

One of the department’s primary telehealth programs is VA Video Connect, which allows veterans to connect with providers from anywhere, using encryption to ensure privacy. Such solutions reduce travel times for veterans, especially those who live in remote areas far away from hospitals and clinics. Using a smartphone or a web-based device, veterans can get easy access to critical care.

“I’m aware of a veteran who has post-traumatic stress disorder,” John Peters, deputy director of VA Telehealth Services, tells FedTech. “She scheduled the appointment for an in-person visit. The day of the appointment came. She went to the car, put the key in the ignition and just could not turn the key, could not go down the road or leave the house to get the care that she needed.”

“VA Video Connect would be able to give that specific veteran access to care that she knew she needed,” Peters added. 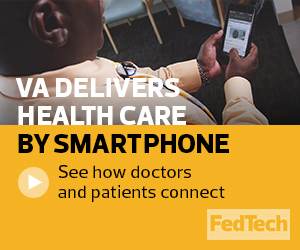 The VA has been engaged in telehealth for about 20 years; most of it has been video conferencing between the patient at a primary care clinic and medical specialist at a VA medical center, according to Peters. It was limited to in-house conferencing because that was where the VA had the equipment and bandwidth, he says.

Now, with the prevalence of mobile technology, the department can deliver care to veterans right on their smartphones. The VA began rolling out Video Connect in July 2017. In fiscal year 2019, more than 900,000 veterans accessed telehealth services 2.6 million times, according to the VA. Of those contacts, 1 million were between a veteran at a community-based outpatient clinic and a hospital, and 300,000 were mobile-device video visits.

If a veteran opts in to use VA Video Connect, the department will send them an email with a URL link. When they click on that encrypted link they will be taken behind the VA’s firewall, Ted Koch, a social worker and virtual care lead with Veterans Integrated Service Network 5, tells FedTech. “They’re not going to be out there and able to be put on YouTube,” he adds.

Many of the veterans Koch sees now are Iraq and Afghanistan war veterans. “These are individuals who have families and maybe work, school and other demands that make this technology and this convenience a very attractive solution for them,” he says.

Valentine developed hypertension while serving. He now sees his doctor once a year. “If I need anything else, I could call the advice line, but this way now, I can connect with her personally,” Valentine says. “That was even better than the advice line.”

That convenience also extends to healthcare providers. “There were a few weather-related incidents where I was unable to actually get out of the home due to snow and ice,” Koch says. “The folks I was seeing at the clinic didn’t have the same weather-related hindrances that I did … I was able to use the technology, and that really helped to provide that seamless care for the patients.”

The training that the VA uses to be able to deliver care via telemedicine is fairly straightforward, according to Koch. “From a clinical perspective, I’m not necessarily doing anything differently than I would be doing in an office setting,” he says.

The ability to closely connect with someone on the other end of a video session was evident from the first time Koch used the solution. “The first person I ever saw was in their upper 80s. He stopped me and he said, ‘Is this the first time that you’re ever doing this? … You seem a little rigid, you seem a little stiff,’” Kock recalls. “And I thought, ‘Wow, here is an individual hours away from where I am who is able to pick up on these really subtle clues over a video medium.’ Right then it sold me.”

The VA is starting to use this technology in emergency rooms, and the department may be “able to treat all patients wherever they happen to be regardless of the clinical concerns,” Koch says. “It’s really, I think, taken off tremendously well with the patients that we’re working with in this fashion.”

VA Video Connect, he says, “really allows our providers to be able to reach patients in a way we were never able to do before. … This really is the start of a new era overall for VA, and for healthcare overall.”