As more federal agencies provide their workers with a virtual desktop experience, they’re choosing between options that IT staff can maintain themselves or push out to a third-party provider.

Through traditional virtual desktop infrastructure (VDI), employees access their desktop and apps from a cloud hosted and maintained by their agency. The model caught on because it meant that agencies didn’t need to service, update or upgrade each piece of hardware, one at a time, throughout the organization.

Agencies could just push those actions from one central location, which has become crucial as the federal government workforce has become more mobile and those hardware devices may not be in a fixed space.

The other choice — Desktop as a Service — is making inroads. With DaaS, desktops (and apps) are still virtual, but work previously done by agency personnel, such as maintenance and updates, is now done by an outside provider.

“They’re both tools. One’s a set of wrenches and the other is a set of sockets,” says Chris Bjornson, CIO of Accenture Federal. “You’re able to scale much more quickly with Desktop as a Service because of what cloud brings to the table.” 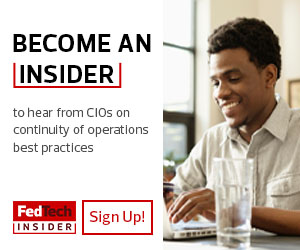 VDI is popular among federal agencies because it is a mature technology “and incredibly secure,” says Chris Howard, vice president of public sector sales at Nutanix. The company works with security and law enforcement agencies.

The Small Business Administration switched to virtual desktops in the spring of 2017. They did so, says Sanjay Gupta, CTO at the SBA, because the agency was desperately in need of IT upgrades.

Adds Gupta, “We knew the cloud would be the direction for us to go forward.”

Instead of putting money into modernizing its outdated data center, the agency invested in cloud instead.

The timing turned out to be opportune as the U.S. was hit with three major hurricanes later that year. Gupta explains, “We had no idea how ugly the hurricane situation would become.”

Hurricanes Harvey, Maria and Irma became three of the five costliest hurricanes ever to hit the United States, causing a total of $265 billion in damage, according to the National Oceanic and Atmospheric Administration.

The SBA had to scale up its Disaster Loan Assistance program, and it did so quickly. “We went from 800 people to more than 6,000 people in about 60 days,” says Gupta.

Creating a virtual desktop cloud for a subset of those people was quicker and more cost-effective than buying hardware; SBA avoided about $350,000 in hardware costs, according to its FY2019 Annual Performance Report. And just as the agency was able to scale up quickly during peak disaster support, it was able to scale back down.

“We’re not investing in hardware, because when the disaster surge comes down, then you have all this hardware sitting with you,” Gupta says.

MORE FROM FEDTECH: Find out how SBA, CBP, USTDA turn to the cloud to keep work flowing.

Agencies Are Seeing Benefits from DaaS

Virtualized desktops are also becoming critical for other agencies with missions that require them to be onsite rather than in the office, including security-related, law enforcement and other emergency agencies, says Steve Nguyen, vice president and general manager of Citrix’s U.S. public sector.

The Defense Logistics Agency, for example, has at least 12,000 virtual desktop infrastructure users around the world. Workers who stay in the office have used Dell zero clients as their VDI interface; others use Windows 10– compatible equipment, according to an agency Facebook post.

But DaaS is catching up as the federal government moves toward more commercial options for infrastructure needs and as commercial cloud providers prove that their products are secure enough for government information and operations. The U.S. Fish and Wildlife Service, for example, purchased Citrix VDI-based Desktop as a Service in mid-2019.

Clouds serving VDI are built, stored and maintained by agency IT personnel. DaaS presents a faster, more nimble option because it can harness the size and power of commercial clouds.

“Even if it’s cost-­neutral, it makes sense because you’re able to focus on the mission faster,” says Howard. “Being able to more easily enable folks with a DaaS environment allows them to be faster and gives that agency much better control over where that data is.”

He doesn’t think DaaS will entirely replace VDI, but he sees it becoming a complementary option. “We have customers that use our DaaS solution and are also running traditional VDI programs on-premises. They can both live together,” he says.

Nguyen, who calls DaaS “next-gen VDI,” says it also provides more options, especially for mission-critical operations. That’s because federal agencies don’t need to limit themselves to one cloud. If one goes down, they can move to another.

In addition, “it gives you that security and ­redundancy that you don’t have today,” he says.