The Small Business Administration’s 2019 move to the cloud paid off ­during the emergencies of the next two years, says CTO Sanjay Gupta.

After a trio of massive, costly hurricanes pummeled the U.S. mainland and Puerto Rico in fall 2017, Sanjay Gupta realized that his agency — the Small Business Administration — needed greater speed and agility to shift its attention to those facing hardship.

Hurricanes Harvey, Irma and Maria were three of the five most damaging hurricanes ever to hit U.S. shores; SBA disbursed about $17.5 billion in 17 days to help owners in the affected regions address damage and losses.

Gupta had no idea then that the nation would face an equally dangerous global pandemic in less than three years and would have to re-enact that mission at an almost unimaginable scale.

Between March 2020 and April 2021, SBA distributed more than $1 trillion in emergency loans and grants to help businesses survive the pandemic-related economic crisis, Gupta says. Prior to that, SBA typically distributed about $25 billion in loans per year, with a high of $30 billion in 2009 as the Great Recession was ending.

From April to August 2020, SBA processed about 5,000 loans per hour, with a peak of 328,000 loans worth $50 billion in a ­single day, says Steve Kucharski, director of SBA’s Office of Performance Systems Management (OPSM). At the same time, 73,000 new users tapped into E-Tran, the agency’s primary loan guaranty system.

Fortunately, SBA had already taken steps toward modernizing its technology infrastructure, equipping employees with ­laptops that smoothed the transition to “maximum telework” for COVID-19, Gupta says. 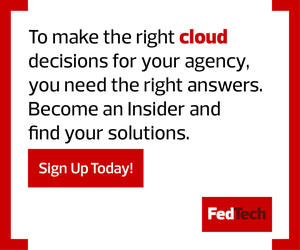 Many of SBA’s systems had moved to the cloud in 2019 with solutions such as Microsoft Azure, Box and other cloud-based apps. That helped immensely when the agency expanded its core workforce staff by about 400 percent, hiring both federal workers and contractors to handle the increased activity spurred by the pandemic.

New employees had to be onboarded remotely, which the agency hadn’t previously done, Gupta says. It used cloud-based virtual desktops and conditional access to support the staffing surge.

“We’re not looking to modernize technology for the sake of technology,” he adds. “The fundamental precept is that we are trying to make sure we can better address our mission needs, and technology happens to be an integral component of that.”

“Getting in the cloud early really helped them scale,” Suder says. If the agency had known COVID-19 was ­coming, “they were doing almost exactly what you’d want. They modernized a lot of their infrastructure.”

SBA also had participated in federal pilot programs to bolster cybersecurity and set up assessments to increase ­visibility into its enterprise, Suder says.

“They did simple things,” he says, such as taking inventory and reducing their tools. “They’re doing a lot of best practices.”

RELATED: The government is preparing to roll out a new federal cloud marketplace.

FEMA Turns to Cloud to Boost Capacity in Emergencies

The Federal Emergency Management Agency prepares for and routinely responds to multiple disasters at once: wildfires, hurricanes and severe flooding, just to name a few. The agency’s sweet spot is logistics: establishing communications networks, devices and software to collect information and bring it into FEMA to calculate the amount of grants, flood insurance coverage and other support, and where it’s needed.

“If you think of the mission of responding to a disaster, and then ­communicating at the edge of that ­disaster with the people who are experiencing it, and then collecting that information and using it to provide ­services and support — it’s about the data,” says Gregory Edwards, FEMA’s senior technical adviser to the CIO.

FEMA regularly has to boost its data center capacity for storage and ­computing at a moment’s notice. Inside its data center, it keeps spare processing and physical storage space available for ­technicians to commandeer in response to disaster.

The measure of time changed for us. We were no longer talking in weeks or months or quarters. It was hours.”

“This isn’t, ‘I need to be able to get a contract to order more computers and more storage.’ It’s ‘I need it now,’” Edwards says.

Artificial intelligence and machine learning tools assist with crunching the numbers and helping to allocate resources. FEMA has pilot programs in procurement and finance using robotic process automation to churn through the data and make sense of it, Edwards says.

IT programmers set the rule to query the database, and bots do the work. The bots boost operational efficiency, reducing human interaction for routine tasks.

Disaster survivors’ data “has to be protected, kept secure so bad guys cannot access that information,” Edwards says. “This isn’t just about the technology, it’s about the ­people and processes as well.”

MORE FROM FEDTECH: How edge computing brings cloud closer to the data for agencies.

Providing emergency loans isn’t new for SBA; it can initiate its existing assistance program once a locality or region has been declared a federal disaster area. For COVID-19, this declaration happened for the entire U.S. at once, when President Donald Trump declared a national emergency in March 2020 in response to the spread of the ­coronavirus. The SBA was able to put its disaster assistance program into action as a result.

The CARES Act, passed just two weeks after the emergency declaration in April 2020, triggered two SBA loan programs: the Economic Injury Disaster Loan (EIDL), which existed prior to the ­pandemic but was altered to get the money to ­recipients faster; and the new Paycheck Protection Program for loan disbursement.

SBA.gov saw huge traffic spikes after those programs were created. On April 3, 2020, a Trump tweet about SBA se­nt user numbers soaring, multiplying them by a factor of 150 “in the blink of an eye,” Gupta says.

The site had been previously moved to cloud infrastructure and built with a serverless, immutable architecture, so it was able to scale in real time and manage the surge smoothly, he says.

Within 24 hours, the agency had put up an online portal for application­ submissions, Gupta says, and set up a “Find a Lender” guide so borrowers could seek loan processing options.

EXPLORE: Learn which data belongs in the cloud.

“The measure of time changed for us,” he says. “We were no longer talking in weeks or months or quarters. It was hours.”

In the first 14 days of the PPP, SBA delivered the same number of loans it had delivered over the past 14 years, OPSM’s Kucharski said during an ATARC webinar in April.

“The No. 1 priority was that we were in the middle of an emergency, we had small businesses that were failing at a record rate, and we had to get funds out at a quick pace,” he says.

If there has been a silver lining to the pandemic, Gupta says, it’s that it created a sudden shift to a digitally savvy workforce. Employees have grown used to ­processing digital documents and accepting e-signatures, while also increasing their use of online collaboration and office productivity tools.

“It has, if you will, brought on the digital transformation that we’ve all been trying to get to for a long time now,” he says. “I cannot imagine how much paper we have not used in the past 12 months.”

In addition to processing hundreds of millions of requests for stimulus payments atop its regular tax season work, the IRS has focused resources on another pandemic-related mission: its Office of Fraud Enforcement, created in March 2020.

Because of the ­pandemic, the IRS had to respond to new types of tax ­fraud — including identity theft related to earned income tax credits — and other criminal activity, as well as the emergence of virtual ­currency, IRS Commissioner Charles Rettig told the Senate Finance Committee in April.

“Our advanced data and analytic strategies allow us to catch instances of tax evasion that would not have been possible just a few years ago,” Rettig said.

In general, Rettig testified, “our external-facing IT systems continue to work extremely well in a time of increased demand, including filing season systems as well as ­ IRS.gov tools.”