The General Services Administration on Tuesday announced the names of the 10 contractors that will administer its $50 billion Enterprise Infrastructure Solutions contract.

Bill Zielinski, deputy assistant commissioner for IT category management in GSA’s Federal Acquisition Service, had indicated in mid-July that the agency was close to awarding the contract.

EIS is expected to enable a wide range of new network technologies and spur the adoption of converged network architectures. It will also require agencies to transition away from the Networx contracting vehicle by the spring of 2020, a process that GSA will work on with agencies. GSA has been working with agencies for more than a year to develop concrete transition plans from Networx to EIS.

Agencies will be able to take advantage of next-generation network technology through EIS — including software-defined networking (SDN) and 5G wireless networks — for the foreseeable future. EIS is expected to extend until 2032. Technology will continually be updated and refreshed under the vehicle, and the contract also builds in time at the end for a transition to a new vehicle. 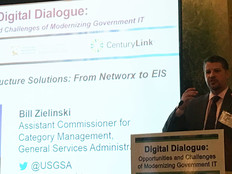