Many agencies are moving ahead with plans to upgrade legacy IT systems, but it will take some time before many are actually replaced. In the meantime, they will be confronted with a clear but hard truth: Aging technologies are generally less secure.

The National Institute of Standards and Technology knows this about as well as any agency in the federal government. Last month it issued a concrete offer of help to agencies to secure legacy systems from cyberattacks and make them more resilient.

NIST released a draft version of the second volume of its Systems Security Engineering guide, Special Publication 800-160, which gives agencies advice on guarding against advanced persistent threats. APTs, the guide notes, have the capability to breach the government’s critical systems, “establish a presence within those systems (often undetected), and inflict immediate and long-term damage to the economic and national security interests of the nation.”

Ron Ross, a NIST fellow and one of the agency’s cybersecurity experts, writes in the guide that for the nation to survive and flourish in the 21st century it must develop “trustworthy, secure systems that are cyber resilient.”

Ross notes: “Cyber resilient systems are those systems that have security measures or safeguards ‘built in’ as a foundational part of the architecture and design and moreover, display a high level of resiliency, which means the systems can withstand cyberattacks, faults, and failures and continue to operate even in a degraded or debilitated state — carrying out the organization’s mission-essential functions.”

The guide is aimed at two distinct groups: IT staffs that are launching new systems or upgrading legacy systems in the normal course of maintaining them; and organizations that are using legacy systems to carry out day-to-day missions and business functions.

How to Engineer Cybersecurity Resiliency

Many federal IT leaders have long maintained that legacy systems are fundamentally insecure, largely because they do not receive regular security patches for outdated software and code. Indeed, an academic study released last year, “Security Breaches in the U.S. Federal Government,” found that there is “a significantly negative relationship between the number of security incidents and the stock of new IT systems,” which was measured by the percentage of IT spending on new IT development over total IT investments for the past five years. For every 1 percentage-point increase agencies invest in new IT, there is a 5 percent decrease in security breaches, the study found.

So how can agencies make their legacy IT more cyber-resilient? NIST’s guide offers four key principles (and a lot of technical advice as well):

The guide includes life cycle processes and cyber resiliency constructs that can be used for new systems, system upgrades or repurposed systems. They can be employed at any stage of the system life cycle and can take advantage of any system or software development methodology including waterfall, spiral or agile.

“We had to address the question of what can we do today to secure the legacy systems we have,” Ross tells CyberScoop.

IT Architectures Can Protect Key Assets

Agencies can architect their IT systems to be more resilient, Ross notes. In addition to continuing to harden perimeter defenses, agencies need to prepare for what happens when an attacker makes it through the walls.

“The second dimension is what happens after they get in?” Ross tells CyberScoop. “How do we limit their access, limit the damage they can do or the data they can steal, limit their time on target?”

Agencies can achieve that by shifting more to virtualized IT environments and can spin up new virtual machines on a regular basis. Since VMs are generated from a secure, hardened disk image, any malware that has made its way inside will be “flushed out of the system,” Ross says.

Agencies also need to find ways to limit the ability of APTs to move within their systems, escalate their privileges and gain access to the network’s secure areas, CyberScoop notes. “There are many architectural and design decisions that can be used to protect your crown jewels,” Ross tells CyberScoop, citing measures such as domain separation and network segmentation. 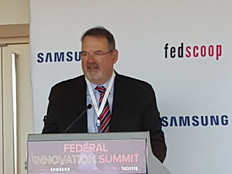