As the 2020 census got underway in January of last year in Toksook Bay, Alaska, it was already shaping up to be unprecedented as the first truly digital census. Then the coronavirus pandemic hit.

The U.S. Census Bureau suspended field operations and ultimately had to race to finish the count on time, which it did, as mandated by the U.S. Constitution. That was only possible because of the technology investments the bureau had made in the years leading up to the decennial count.

The pandemic delayed the door-to-door field operations for two months, huge wildfires in the West kept census enumerators away from endangered communities, social unrest caused unease in some neighborhoods and a record-breaking hurricane season hindered the count in the Gulf region.

“Our scope of problems for the things that could have happened in the census didn’t come close to what really happened in the 2020 census,” says Michael Thieme, the Census Bureau’s assistant director for decennial census programs, systems and contracts. 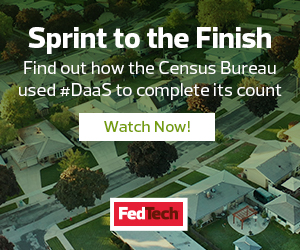 Planning Made an All-Digital Census Possible

For decades, census enumerators went door to door with clipboards and paper across the United States to collect demographic information on people who hadn’t responded to census forms. The Census Bureau had tried to implement a digital collection effort for the 2010 count but ultimately scrapped it and spent the subsequent decade researching and developing the best solution to make the census an all-digital effort.

The Census Bureau quickly discovered a major hiccup in the process. “We found it a pretty painful experience to actually provision the devices and kits and acquire and dispose” of the devices, Thieme says. Ultimately, the bureau decided to partner with CDW•G to use a Device as a Service model to deploy more than 600,000 Apple iPhone 8 devices to enumerators so they could carry out their data collection in the field.

Early in the planning process, it became obvious that the agency needed to solve more of a logistics problem than a technology issue, says Brian Costello, director of civilian sales at CDW•G.

“If you don’t have a device in somebody’s hands at the right time when they’re ready to go out and start their canvassing, the technology working doesn’t matter if it’s not in their hands,” he notes.

CDW•G was responsible for acquiring the devices, provisioning and configuring them and getting them to the Census Bureau’s local offices, according to Randy Harris, vice president of federal program management, capture and services at CDW•G. At that point, the agency distributed the devices to enumerators.

“We’re very happy that we did set it up that way. It made things much easier,” Thieme says.

RELATED: How can configuration management specialists help your agency roll out devices?

How the Census Bureau Overcame Obstacles to the 2020 Count

By March, the devices and census operations were ready to go. “With a number of other large programs that we have, they don’t require a shotgun start, which is to have all the devices ready to go at the same moment in order to execute a mission,” Harris says. “This is the largest peacetime mobilization within the U.S., I think, if not the world.”

Before the pandemic struck, CDW•G already had all its processes aligned, with multiple teams working to provision the devices, says Jocelyn Guiwan, senior manager of configuration services at CDW.

The Census Bureau, like other federal agencies and the world at large, had to contend with the effects of the pandemic throughout the year. On March 12, the agency opened up its website to collect census data, Thieme says. Within a week, the count was shut down and the agency didn’t get back into the field again for three months.

“It was just one thing after another in 2020, and we all went through it, so we know what that was like,” Thieme says.

Once field operations resumed, the race was on to collect as much data as possible to get the most accurate count. The census is used for a wide range of purposes, including the distribution of billions of dollars in federal funding every year and the apportionment of seats each state gets in the House of Representatives.

There is no way we could have finished the census without the technology we designed.”

All enumerators had to do was take the smartphones out of their boxes, log in, open the Census Bureau application and start entering data. The data was immediately forwarded to secure servers and encrypted on the devices, in transit and in Census Bureau systems, according to Thieme. The only time it was stored locally on the devices was when enumerators encountered connectivity issues in remote areas.

“We all received this cute little box with all the stuff in it, and we looked at it together with someone from the Census Bureau, and we had to sign for it,” says Rosemary Armao, an enumerator in Albany, N.Y. “You kept track of your mileage and all of that through the app, you didn’t have separate paperwork. It would tell you all the places you were going to go and you planned your day around that.”

The devices were locked to the Census Bureau via the Apple Device Enrollment Program, and also were secured by Apple’s mobile device management software, according to Scott Erickson, senior manager of configuration services at CDW. Without specific Census Bureau credentials, anyone who found a Census Bureau iPhone could not use it.

CDW•G was able to keep the provisioning and collection of devices going and enacted social distancing protocols for its workers, according to Erickson and Guiwan.

DIVE DEEPER: How did technology power the 2020 census?

However, there were other obstacles the bureau had to manage. “We were concerned that we may not be able to get finished because of COVID, or a hurricane, or whatever,” he says. “We had to essentially stop data collection in areas where air quality was so bad that we felt like we couldn’t send people outside.”

Harris says that no one “envisioned that stop-start, stop-start kind of a situation or environment,” but both the bureau and CDW•G rolled with the punches. The two worked together to ensure the data was collected and that the devices were sent back to be deprovisioned and cleaned.

“We weren’t successful until the entire project was done.,” Guiwan says “We knew we got the provisioning piece done, but when those devices got back and we were done sanitizing them, that’s when we considered it a success.”

It was a sprint to the finish, but the count was completed and the final numbers were released in late April, showing that as of April 1, 2020, there were 331,449,281 Americans.

“This is my third census, and I’ve never been through a situation where we had so many reasons to think we might not finish,” Thieme says. “Automation saved us. If we had done the census the way we did it in 2010, we would have been stopped. This is one of the unsung successes of 2020, I think, that the census actually got done.”