There are plenty of “Best Places to Live” lists on the Internet, but none offer the personalization to make them useful for everyone. The United States Census Bureau is leveraging its massive database to help anyone with a smartphone identify great places to live, work and visit, based on demographic profile, education, skills and interests. 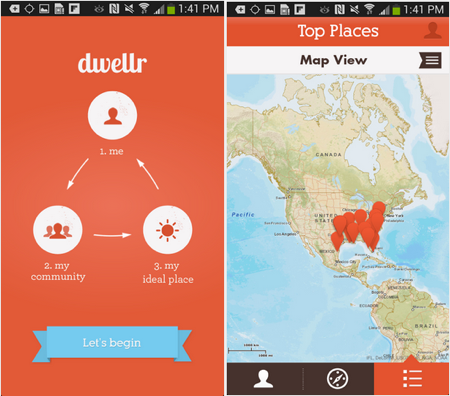 The app, called dwellr, was released last month and is the government’s latest effort to make its data open and useful. It’s also designed to help spark moving in America. While the most popular and expensive cities continue to become less affordable, the government wants citizens to remember the smaller urban areas and rural areas. According to the New York Times, Americans are moving across state lines at half the rate they did about 20 years ago:

Economic mobility and geographic mobility have been closely linked for much of American history, so economists find it troubling that migration rates have been in decline lately. The proportion of Americans moving has fallen to new postwar lows in the past few years. According to Census Bureau data from 2013, about 4.8 million Americans moved across state lines in the previous year. That is down from 5.7 million in 2006 and 7.5 million in 1999. All in all, the percentage of Americans moving across state lines has fallen by about half since the 1990s.

The slowdown represents a tectonic shift in our economy and labor market: It has affected a huge swath of Americans across all industries and of all incomes and ages.

There are other goals, too. For example, the Census Bureau is trying to promote their API, which lets any developer use its data to create other mobile apps:

The statistics in dwellr are only the beginning of a powerful story you can tell with Census Bureau data. Imagine if an app matched your preferences with restaurant reviews, places with museums or most visited parks. With the Census Bureau’s application programming interface, developers can take the same statistics found in dwellr and apply them to any app they can imagine. We are eager to see new applications of these American Community Survey statistics that help people learn more about their communities using the same information businesses use to plan investments and services. These statistics, along with the Census Bureau’s other economic information, provide timely, critical information on the health of the U.S. economy.

The app itself is nicely designed and easy to use. It’s a free download on Apple and Android devices and worth checking out.