White House officials have repeatedly said that modernizing federal technology is not something that can be accomplished in or two years, or even in one administration. Usually, at that point, a running metaphor is thrown in, and the effort is compared to a relay race or a marathon. The next leg of the journey is in sight.

Within the next few weeks, the General Services Administration will name the second agency that will participate in its Centers of Excellence model for IT modernization, Chris Liddell, the White House’s deputy chief of staff for policy coordination, said Aug. 21 at the FedTalks 2018 event in Washington, D.C. The Agriculture Department has been serving as the “lighthouse agency” for the CoE model, and the second phase of its implementation of the initiative is about to begin.

Liddell also said that a search is well underway for a replacement for Joanne Collins Smee, deputy commissioner of the GSA’s Federal Acquisition Service and director of its Technology Transformation Service. Collins Smee has been a driving force behind the CoEs.

The White House will continue to focus on its themes related to IT modernization, building institutional capability for long-term change, getting people into key positions to carry out that change and continuing the momentum of early wins.

“The whole idea with long-term programs is you have to stay the course,” Liddell said, adding that the Trump administration has “set a vision” for IT modernization and is setting up a platform that can be used for the next five to 15 years. A key long-term goal of it all is to “change the slop of innovation” within federal IT, Liddell said, so that once the government eventually catches up to the private sector in terms of technology it can maintain the same kind of pace of innovation.

The five CoEs are run by the GSA and based around cloud adoption, IT infrastructure optimization, customer experience, service delivery analytics and contact centers. The goal of the centers is to accelerate modernization by leveraging private-sector expertise and talent, and to provide agencies with consulting and IT engineering services to radically improve the way they design services and interact with their citizens.

USDA is in the process of implementing the CoEs, and the goal is to take the lessons learned at the agency and replicate best practices throughout other agencies, tailoring them to specific agency needs.

“In fact, we’re in the final stages of choosing the second lighthouse agency, which should be in the next few weeks,” Liddell said. “We’re basically going to pick up a lot of the expertise and knowledge and do it.”

Collins Smee, who GSA announced a few weeks ago will depart the agency by the end of August after less than a year, recently told Nextgov that the next agency to go through the CoE model would be “announced by the beginning of October, for sure.”

USDA issued solicitations this week for phase two of the CoE project, as FedScoop reports, for the five key focus areas as well as its program management office. USDA’s IT leaders are detailed to GSA and embedded in the CoEs, and when the GSA officials leave the USDA, those employees will stay and be the future leaders in those areas, Collins Smee tells Nextgov.

“The very first phase will finish in the end of September. We’ve already gone out on the street with the [request for proposals] for the next stage, which is long-term implementation, which will commence in the beginning of October,” Collins Smee tells Nextgov. “If you think of that cloud migration, we’re plotting what are the apps that are going to move where and what time frame. So, phase two starts the actual migration of those apps. That's an example of implementation. That next phase goes a year or two years, depending on which CoE.”

When GSA finishes the second phase at USDA it will leave, having done a great deal of change management and training, Collins Smee says. “We’re embedded with them now, we work shoulder to shoulder with them every day at the Whitten Center at USDA and their various buildings,” she says. “So, we will leave, but we will leave a team that is then able to continue ongoing management of these projects. We’re for another year or two years, depending on which project.”

“We meet with them very, very regularly, and as I said, we're over there in the hallway with Gary Washington and his team. So, we have those kind of minute-by-minute conversations, but we also have formal, organized reviews with the rest of the leadership at USDA,” Collins Smee tells Nextgov. “I did not realize when I joined that I would have that level of support. That was another good surprise for me. That was a really happy surprise, because in the government things can be a little bit harder than in the private sector. So, that has made our progress easier, when we have that level of support and help.”

At the FedTalks event, Liddell praised Collins Smee as someone who was able to take the COE model from a concept and turn it into a reality. “We need to replace [her] with a new leader that’s going to take the Centers of Excellence to the next level,” he said. “We’re just recruiting people at the moment, and we're putting together a fabulous shortlist for that.”

Liddell added that “people are really excited about how they can take what Joanne has created as a platform and take it to a greater level.” 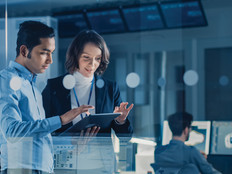